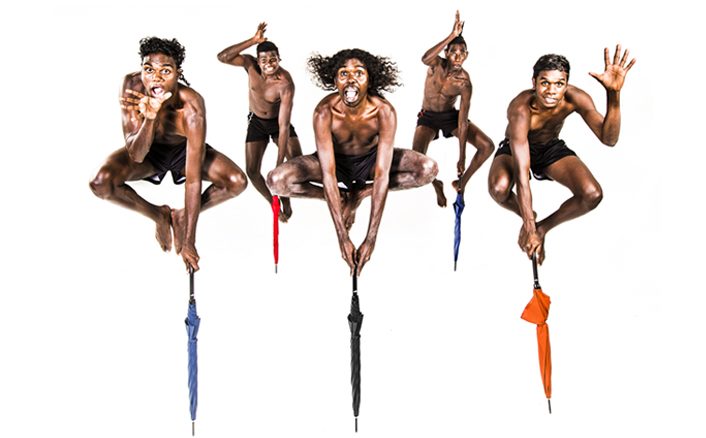 A stunning fusion of traditional Yolngu and contemporary pop culture, dance and storytelling

Originally set up as a dance group to help combat the Aboroginal kids who were “becoming sick from too much sugar” and to get fit, Djuki Mala, their indigenous name, became a YouTube sensation in 2007 when this group of local Elcho Island dancers choreographed and performed a dance routine to Zorba the Greek. The performance was recorded and uploaded to YouTube; in under 12 months the video received more than 850,000 views.

Josh, their white Australian producer, cannot hide his delight at their first sold out show in Europe, explaining the journey of this group,  from a remote “bush” company to now celebrating their 10th anniversary, with this tour. He explains the origins of their traditional culture and how this show had been conceived and created on a basketball court and tried out on their community, asking us to now be their family and show appreciation by clapping and cheering.

The shows uses video projection to explain the culture of the Aboriginal people, using time-lined imagery, cartoons and subtitled interviews with elders of the group, interspersed with dancing to explain how this tribe and indeed the Chooky dancers evolved. The quality of the projection is somewhat crude, with not all the subtitles legible, but it helps to add a narrative to the performance.

The dancers start the show with a traditional display of Aboriginal dancing, set to indigenous sounds and music. Dressed in traditional costumes and ochre, with Gara (spears) and Galpu (spear thrower), it’s dark and haunting and cheekily confusing as it differs from the show’s promotional poster, which suggests a show of fun and humour.

Thankfully, after about 15 minutes, it morphs into the show we have all been waiting for, moving from a traditional dance into the Zorba the Greek dance they have become so famous for. The funny dance and comedic element , which is synonymous with their community, where “in a young boy’s initiation ceremony, stupid dances are made up and performed at the ceremony to make it a more fun day for the boy”, has the audience eating out of their hands.

The show then moves more upbeat, with skillful dance moves interpreting modern pop culture and the likes of Michael Jackson, The King, Motown, hip hop and break-dancing. The interpretation of Gene Kelly’s Singing in the Rain, with the brightly coloured umbrellas, was particularly enjoyable for its humour. These boys can certainly dance. The overall work reflects the juxtapositions they see in contemporary Yolngu culture, offering a rare and insightful view into Aboriginal Australia, whilst blending popular culture.

This is a show of sheer joy, energy, hilarity as well as educating that fuses traditional and contemporary dance. Hugely entertaining.