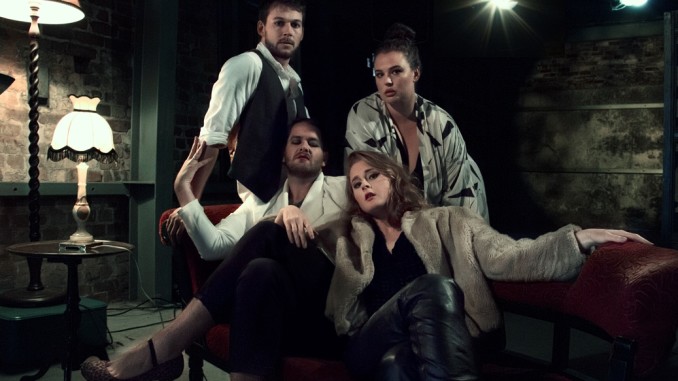 When Prince wrote his meisterwerk, ‘Sexy M.F’, he may well have been imagining the crew of Wellingtonian theatre troupe Slightly Isolated Dog. They shimmy onto the stage of their show Don Juan, all Jean-Paul Gaultier eyeliner, black leather, sky-high heels, and outrageous French accents. “We are very famous, and very French,” they assure us (though the accents suggest more ‘Allo ‘Allo than Aix-en-Provence), in between cooing at what an attractive – nay, gorgeous – nay, stunning audience we are. It sets the scene for an hour of sublime silliness: we’re going to be part of the show, it’s clear, but lovingly, joyously, sexily included, never to be ridiculed.

And what a show. The energetic crew take us on a whiplash tour of the legend of Don Juan, from his wronging of the virtuous Donna Elvira, to his escape from her vengeful brothers, to his fateful encounter in Hell. The man himself is a baseball-capped player, wearing 80’s shades and delivering his blustering dialogue through a microphone and mini-speaker. Each of the company in turn plays the notorious lover, po-faced and remorseless – and utterly ridiculous.

A series of set-pieces are delivered with gleeful exuberance and impeccable comic timing by the five-strong troupe. Most delightful, however, is their inventive use of every theatrical method they can get their hands on, from mime, to barn-storming song (there’s a rendition of ‘100 Days, 100 Nights’ delivered by Jack Buchanan in such a primal growl that it will leave you more than a little hot and bothered, while Comfrey Sanders belts out Fiona Apple’s ‘Container’ with soaring clarity) to slapstick, to brilliantly-utilised sound design. They never content themselves with lazy storytelling: there has to be a twist, an ingenious and resourceful way of transporting the audience. This extends to prop-work and set design: broken umbrellas conjure a diabolic forest, a black sheet of plastic, cleverly deployed, morphs into a stormy sea. And if, ultimately, the show amounts to little more than a sizzling romp, well – there’s no finer way to while away an hour.  A delectable delight.