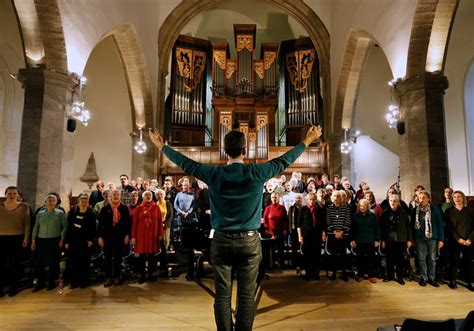 ERCU promise much and don't fail to deliver.

Edinburgh is very lucky to have a number of very good choirs and the Edinburgh Royal Choral Union is among the best of them. Tonight, they are singing one of the great choral works—Bach’s Mass in B Minor—in St Cuthbert’s Church, perhaps the most ornate Protestant church in Edinburgh. They are being conducted by their director, Michael Bawtree, who has an international reputation as both a choral and orchestral conductor. He is also conducting the excellent Edinburgh Pro Musica Orchestra, made up of some of the best musicians in Edinburgh.

In addition, ERCU are complemented by a fine array of soloists: Emma Morwood, the Edinburgh-based internationally renowned soprano; British soprano Katherine Crompton, who is making a name in the opera world; countertenor Alexander Chance, who is the son of renowned singer Michael Chance and seems likely to rival his father’s reputation; Nathan Vale, a young tenor on the way up; and finally, young British bass-baritone Edward Grint. Together, the choir, orchestra and soloists are of the highest international standards: they promise much and they don’t fail to deliver.

Bach’s B Minor Mass was written towards the end of his life in 1745, and Bach never heard it being performed. However, elements of it were composed earlier, including a smaller Missa in 1735 and various parts from earlier cantatas, including the fabulous Agnes Dei sung by the countertenor, taken from his Ascension Oratorio of 1735. It remains one of the finest works by this great composer and one of the jewels of the choral tradition. From the opening Kyrie eleison of the chorus and the following Christe eleison soprano duet, it becomes clear we are in for a vocal treat. Morwood’s voice soars to the heights of St Cuthbert’s, and the chorus deliver a lovely mellow tone.

The only slight problem is that St Cuthbert’s can only place part of the choir centrally behind the orchestra and the parts that are spread to the right and left of the church can lose a little vocal impact. However, despite this limitation, the choir sound very good indeed and the soloists are excellent. Bawtree is very much in charge and the very full St Cuthbert’s Church give a warm response to this great choral work.