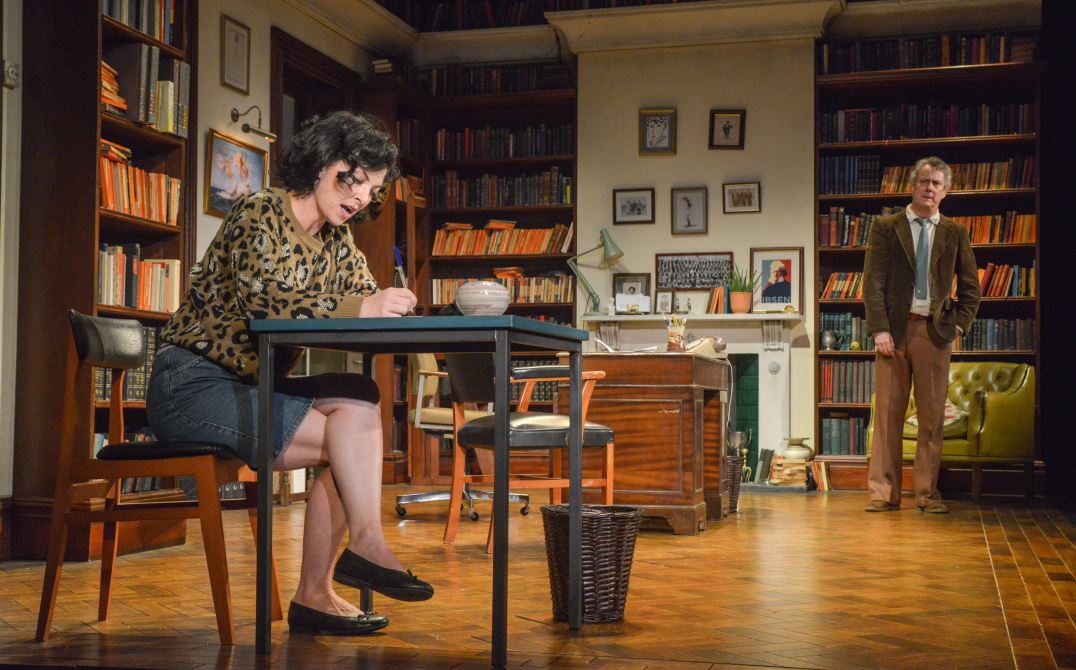 Willy Russell’s script shines through this fierce pairing of Tompkinson and Johnson.

Cheery 80s music greets the crowd filing into Eden Court’s Empire Theatre for Educating Rita. The curtain is up. A dimly-lit, naturalistic set of a study with an imposing desk and floor-to-ceiling books sets the scene. Nothing out of the ordinary for an academic context, but the loving attention to detail is touching: every picture above the fireplace is hanging a little squint. All is not well: a subtle stroke of stage design genius.

Stephen Tompkinson is not one of the country’s most loved stage actors for nothing – he inhabits the space as the dishevelled academic Frank, whose drinking habit forces him to commit to Open University tuition after hours. By contrast, Jessica Johnson’s ‘Rita’ (real name Susan, but she is re-inventing herself as someone much more glamorous) is loud, brash, awkward and a little fake. Grimacing and gesturing, she can’t help but irritate the audience a little, and surely, that is the point: We judge her, just like Frank judges her.

Despite two very capable performances, Willy Russell’s script is the real star of the show. Witty and tight, it sends up the notion of self-improvement and social mobility, self-satisfied arrogance, and ironically even the study of literature itself. Some lines are laugh-out-loud funny, but at its best, the script delivers wry observations we recognise as universal. When asked why his partner left him, Frank replies: “I like her enormously. It’s myself I’m not too fond of.” Much of the evening’s humour derives from this, and yet by the end, there is an explicit and implicit acknowledgement that betterment is possible, that education matters and that we’d do well to recognise that we can learn from anyone.

The two actors accomplish a lot in a little over two hours. The exceptionally wordy and complex script is delivered between them alone. There is little movement without words and all scene changes and props are dealt with without stage-hands. In essence, the play works due to a number of key reversals and shifts: A central reversal in status takes place as Frank realises that, increasingly, he needs Rita more than she needs him. There is a shift in accent, in appearance, in movement (increasingly subtle) in Rita’s character, just as Frank becomes more unhinged. Their relationship, and consequently the mood of the play, oscillates between easy banter, confused stand-offs and heart-wrenching honesty, before returning to humour again.

Is it perfect? Not always. The Rita of the opening scenes is more caricature than character – a directorial choice which grates a little – and clarity is sometimes lost in the quickfire exchanges which may have benefited from a pause or two.

But is it good? Oh my goodness, YES!