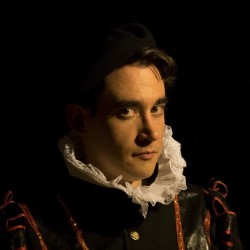 A great idea failed by its script and delivery.

Before Elizabethan starts, the audience are given a disclaimer which states that the songs were genuinely written between 1580 and 1620 and any offense they may cause should be directed at persons long dead. But the problem with this one-man show isn’t the songs – it’s the script and claim that this historical musical is a comedy.

David William Hughes, who also wrote the play, performs as Tobias Bacon and several of his lovers (with a little help from the audience). Bacon died of love in 1618 and we join him on the 400th anniversary of his death to journey through his romantic encounters with the three women who stole his heart.

Hughes is an accomplished musician, as he performs Renaissance music on his lute and uses his impressive vocal range. Unfortunately, the attempts at humour consistently miss the mark. Even obvious jokes regarding his name and the mildly amusing monikers of his lovers barely raise a chuckle.

The show relies heavily on audience participation, which in this performance was not voluntary – all three participants are chosen from the front row and are increasingly uncomfortable on stage. As well as the discomfort of the participants, the problem with the audience interaction is Hughes’ improvisation skills: if something unscripted happens he flounders and fluffs his lines.

What could have been a risqué, broad comedy in the style of Blackadder II is instead smug and insipid. There is a mix of questionable historical comedy which “isn’t racist because it’s of the period” with contemporary jokes about ghosting and a brief, jarring burst of Barbie Girl. It’s clear that jokes about Gauguin have fallen flat previously, yet the show continues to use them. There’s definitely a skill in tweaking your performance to suit your audience – sadly, Hughes doesn’t appear to possess this.