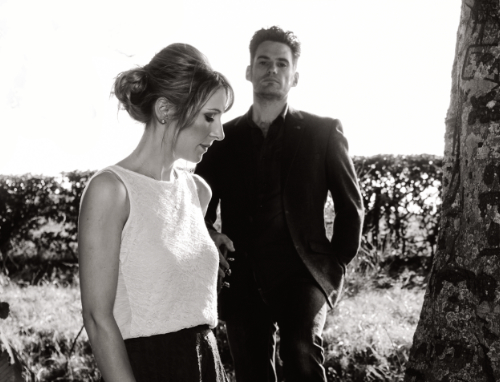 The beauty of music, words and delivery simply takes the breath away

The lights dim and Emily Smith and Jamie McClennan enter the stage in Eden Court’s Onetouch theatre to applause. No verbose greeting, merely a look of acknowledgement, and they’re away: straight into the evocative minor rhythms and harmonies of Reres Hill.

McClennan’s gentle plucking soon builds and falls with sympathetic dynamics, much more striking than on the albums. He is an uber-talented and versatile musician, and just as well – last time Emily Smith played Eden Court, McClennan was one of two accompanying musicians. But tonight the couple (yes, they are married with two children) are on their own and have to multitask: Smith plays accordion and, newly confidently, guitar while McClennan sets aside his guitar for the fiddle on which he is equally at home.

Both are accomplished singers, but Emily Smith’s distinctive voice conjures up stories with a glassy-clear, effortless quality which surely makes her unique in the Scottish folk scene.
While previous outings have understandably focused on her as a soloist, tonight’s show – fittingly – sees a more even distribution of the limelight: the tour celebrates the couple’s fifteen-year collaboration in music.

New Zealander McClennan introduces new material harking back to the “Great New Zealand Songbook” he discovered on a recent home visit, and Emily takes her turn as a backing singer providing the harmonies. His back catalogue also provides opportunities for banter: Annabelle clearly does not refer to his wife, and she makes the most of the opportunity. The first half ends with Tim O’Brien’s Safe in Your Arms, beautifully rendered through its sparse fiddle accompaniment.

Apart from the sing-along The Final Trawl, the second part of the evening features less familiar fare, focusing instead on some new material: the poignant Firefly about the refuge of imagination; Hard Times, a song about the pioneer Mackenzie; and the outstanding The American Stranger during which the two performers harmonise and read each other with ease. Their enjoyment is evident: just like the audience, they each seem to appreciate what the other brings to the stage, and they revel in it.

Moments of humour mingle with emotional and genuinely moving material. At times, however, the beauty of music, words and delivery simply takes the breath away, as in Joni Mitchell’s Urge for Going. John o’ Dreams, to audience cheers, completes the evening. For all our sakes, let’s hope Smith and McClennan make music together for fifteen more years, and then some. The bad news: their performance at the Stirling Tolbooth today, 23rd September will be the last of this run. The good news: they did mention they were heading straight to the studio to record new material next week…