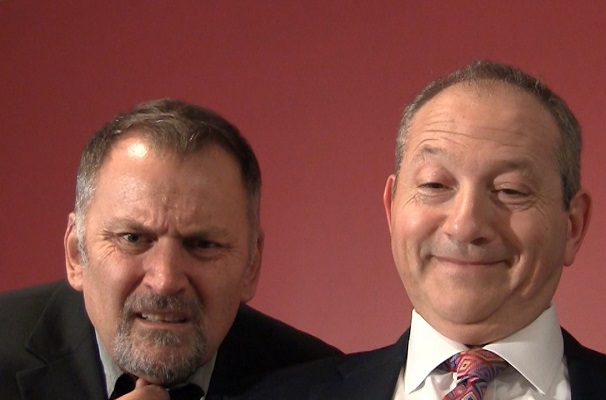 Four men in suits, jostling to impress the chairman. We see a series of vignettes of them boasting about their abilities, commending their own intelligence, observing the vagaries of the financial marketplace and using their wit and insight in an attempt to profit from it.

There is something of a Kafka novel about Brian Parks’ new play. We don’t know anything much about these men, their suits different shades of neutral discretion, their accents identikit corporate America, their faces engraved with been-there-done-that world weariness. We hear them debate how best to defer to the Chairman but we never meet him. (For he’s also a he.) And even in the final climactic moments of the play when the two competing teams burst into his office to present their winning strategies to rescue the company’s ailing share price, we are cheated out of meeting him.

This is a polished production from director David Calvitto, neatly choreographed, impeccably timed. Actors Matt Boston, Christopher Carley, Brian Dykstra and Jonathan Fishman deliver their lines with professional relish. For anyone who has ever worked with people in suits, the endless streams of corporate gobbledegook that pour from their mouths is impressively, disturbingly funny. The scene in which one acolyte describes his self-painted portrait of the chairman to another is marvellous though squirm-inducing to watch.

We take our seats before the play begins to a soundtrack of Chuck Berry’s “Too Much Monkey Business”. It sets the tone nicely. Men in suits sending a message about corporate America doesn’t feel especially original. Tom Wolfe has been there and got the T-shirt. But perhaps we’re meant to see an analogy to contemporary America – a figurehead who makes everyone jump through hoops and disappears before he has to deal with any of the consequences. We can hope.