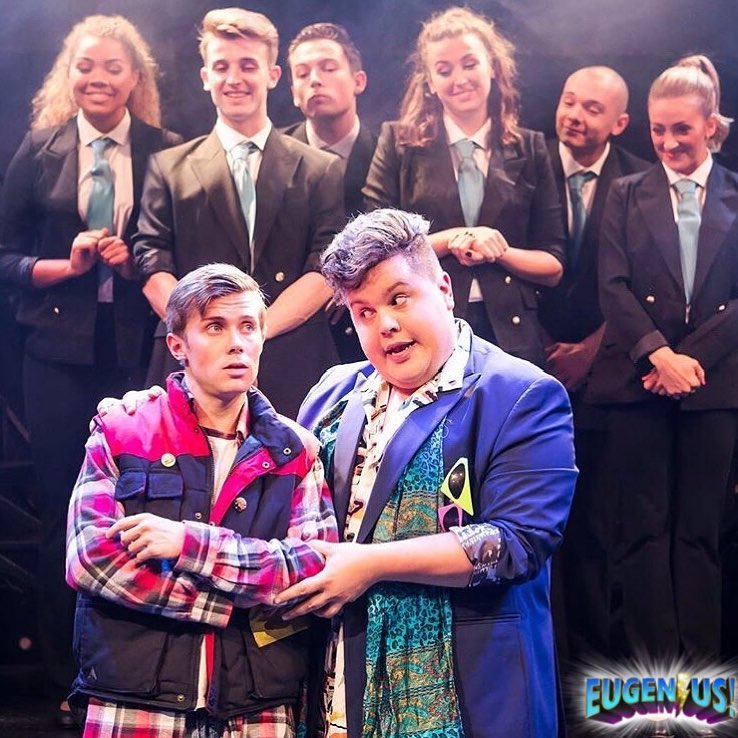 Non-stop, feel good, glorious theatre – and a bit mad, too

This 2018 recording of the zany 80s-themed comic-book musical has been released online, with viewers encouraged to follow a link and support the charity Acting for Others which offers support to theatre workers in need. Produced by Warwick Davis, and directed with bubbly energy by Ian Talbot, the show won many Off West End awards during its initial run. It was due to transfer to the Ambassador’s Theatre and enjoy a 10-week West End run. Sadly the transfer never happened, but this archive show highlights just why this non-stop, feel-good, glorious experience was such a success in its runs at The Other Palace, and there is little doubt that it would have surely created a similar buzz in the West End.

Geeky teen Eugene (Rob Houchen) and his comic-book dreams form the (flaky) narrative. Alongside his equally uncool friends, Janey (Laura Baldwin) and Ferris (Daniel Buckley), Eugene follows his dreams as his superhero characters become the subject of a Hollywood movie. The standout in this setting is a wonderfully camp Scott Paige as a production assistant, with Alex Bourne serving as a convincingly ruthless producer. But the whole cast and ensemble are strong, and steer us enjoyably through a great mix of material. Eugenius! boasts cracking musical numbers, much hilarity, appropriately bizarre costumes, and an endless amount of kitsch, 80s pop culture references – from Milli Vanilli to Roger Rabbit and O.J. Simpson. The voice-overs by Mark Hamill and Brian Blessed, icons of the genre, do no harm to the show’s credentials either.

It is the music that is the heart of the show however. You get the feeling, even on-screen, that live audiences were lapping it up. From the opening ensemble number celebrating Eugene’s fantasy superhero (“Tough Man”), the show careers along with the wheels just staying on. Even if not entirely convincing as a teen, Houchen excels in an early solo, “Comic Book Kind of Love”. Both he and the vividly expressive Baldwin are major musical talents thoroughly deserving chances to shine. Their duets do ample justice to the show’s vibrant and varied soundtrack.

The production overcomes the venue’s physical limitations, using sound, set and costume with verve. On a tight stage, movement is assured, and back projection, set design, and effects maintain the veneer of space and fantasy. At no point does the energy ever let up. Typical of the deft direction and choreography is the banger “Don’t shoot for the Stars (Shoot Higher)”, led by Baldwin and Buckley. This number features a pulsing adrenaline-fuelled chorus, and showcases the band’s rock credentials.

The show is certainly not subtle, it won’t give major insights, and it is frankly a bit mad; but Eugenius! is still great fun. In a whirlwind of legwarmers, spandex and big hair, this nostalgia-fest is essentially a romp. You want to punch the air with the cast and audience, in the final reprise of the infectious chorus “Go Eugenius!” Catch it if you can.

Eugenius! can be streamed online through YouTube in support of Acting for Others here.

Donations to Acting for Others can be made here to support those in the theatre industry struggling financially and emotionally during the current global health crisis.