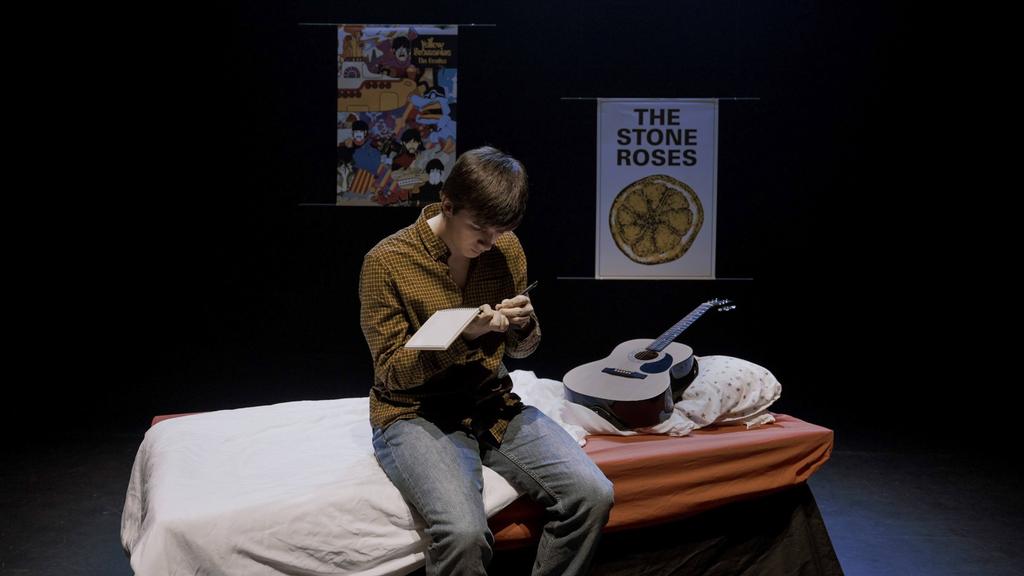 A tender and timely celebration of Greenock's 90s music scene

In a Greenock bowling club, a lonely figure sits despondently consuming pints and crisps; a familiar-looking depiction of the disillusionment of middle age that feels instantly recognisable as typically Scottish, working class and male. Tommy MacIntosh (Andy Clark) is a former musician whose band, Battery Park, stopped just short of achieving big time success in their 90s Britpop heyday. Present day Tommy, resigned to defeat, troubled by unresolved personal trauma, and disenchanted by culture and politics in post-Brexit Britain, avoids indulging in nostalgia for his youth as rigidly as he rejects any hint of optimism for the future. His solitude is disrupted by Lucy (Rosie Graham), a young student who claims to be studying Battery Park for a university dissertation on Britpop. The connection between them turns out to be more personal than it first appears, and Tommy is forced by their encounter to confront his past, and look to the future with a new perspective.

Written, directed and composed by Andy McGregor, Ever Young is a short film/theatre hybrid, designed as a companion piece to a promising and exciting-sounding larger production, Battery Park – a musical about Tommy’s band and the wider music scene in 90s Greenock. Consisting of a mixture of stage production and film footage, Ever Young’s concise run time and apparently simple premise disguise a deceptively intricate array of ideas.

The generation gap between Tommy and Lucy, highlighted through some lost cultural references and differing perspectives, serves to allow the production to seemingly organically explore issues related to Scottish identity, social class and gender. Despite Tommy’s initial scepticism, Lucy shows him that the youth culture that he feels alienated from is actually a space in which his work and ideas are viewed as having far greater relevance and legitimacy than even he has ever granted them. Compelling performances by the lead actors bring out the nuances in McGregor’s script, ensuring the peppering of musical references feels like an authentically celebratory meeting of minds for two genuine enthusiasts.

As a stand alone piece Ever Young might threaten to feel incomplete in places, but as a prelude to a longer production it’s an appropriate balance of satisfying and titillating. Similarly, although some of the 90s flashback sequences veer towards cheesiness at points, this is both forgivable within the context of a character’s overt nostalgia, and – in the case of the film segments, particularly – a reminder to all of us of the innovation and creative solutions theatre groups must employ in order to continue continue making productions during lockdown. Ever Young’s heart, sensitivity and accessibility not only make it an enjoyable piece in its own right, but an indicator that the forthcoming Battery Park  will be a project worth getting excited about.