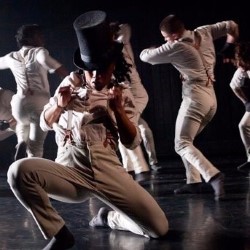 An exciting contemporary take on a classic British story worthy of any stage in the country.

The Avant Garde Dance Company reveal an alternative version of the familiar Oliver Twist story written by Charles Dickens we all know and love in this intricate and dramatic dance performance.

It is not always easy to tell a story through dance in the same way a more traditional drama production might offer, but the story of Fagin’s rise and fall is brought to life spectacularly here. There are snippets of spoken narration but the bulk of the story is told through physical movement, with each character having their own distinctive style; from meek little Oliver played by Jemima Brown, who has a lightness of touch testament to her London Contemporary Dance School training, to the Artful Dodger (Aaron Nuttall), whose powerful break-dancing lends itself perfectly to the role of cheeky chappy.

But this is the story of Fagin, and Joshua James Smith is delightful as the enigmatic pickpocket-cum-businessman. His playful portrayal of Fagin is a perfect contrast to the physicality and power of Bill Sykes played by Dani Harris-Walters. Together the company of dancers present an exciting brand of performance with complex and intelligent choreography married with an explosive energy most apparent when the cast come together on the stage.

The dancers weave and twist their way around the simple yet effective wooden set, adding level and dimension, and the eclectic selection of music only adds to the rising tension and excitement as the performance builds to a surprising crescendo. All is not as it seems in this contemporary take on a British classic and all will leave thinking slightly less of Oliver Twist as a character than they did before.

The genius behind this work is choreographer, founder and director of the London-based Avant Garde Dance Company Tony Adigun, and with Fagin’s Twist he has produced something true to his aims of creativity, abstraction and artistry. This is show a worthy of any stage in the country.