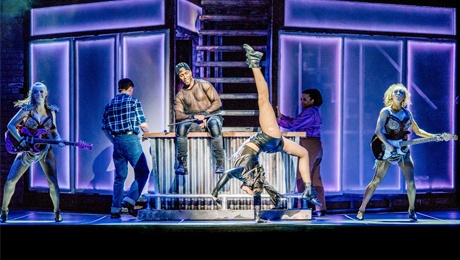 Cast reshuffle may take time to gel, but what a feeling!

Released in 1983, dance movie Flashdance tells the tale of an 18 year old welder – and she’s a she – who is brilliant at her day job, pretty competent at her night job (dancing in a bar that verges on being a strip club) but dreams instead of attending ballet school. In a deliciously classic boy-meets-girl storyline, Alex bumps – literally – into the son of the guy who owns the factory, Nick. And the “will they won’t they” intrigue unfolds from there. Pile in a feisty best friend who’s led astray, a hapless wannabe comedian, Alex’s ailing dance teacher, the haughty dance college staff, a pack of welders-cum-80s-ravers and a clutch of anthems and you have plenty of ingredients for a knockout stage show.

But the stage show is somewhat impeded by a pack of songs that were clearly added in to make the story more than a collection of anthems linked by a plot. The additions are perfectly sweet and contribute a lot of exposition but can’t hold a torch to ‘Maniac’, ‘Manhunt’ and ‘What a Feeling’ (specially written for the film, this went on to win an Oscar).

The second challenge for this production was this is, in effect, its first night. The 2017 tour finished early December and the January version, first shown in Edinburgh tonight, features new principals, a bit of a cast reshuffle and of course, a whole new stage. The set is essentially a couple of staircases, some hard working panels that double as doors and surfaces for a projector, a bed and a bar. But there are so many short scenes and so much repositioning between them that the scene-shifting cast are kept on their toes throughout. So it’s perhaps not surprising that the first outing lacks some of the synchronised timing you might expect, not helped by some excruciating technical hiccups with both lighting (way too many shadowed faces) and sound (at one point, Alex battles to duet with a malfunctioning mic and a perfectly amplified Nick).

Hiccups aside, this is a clearly a talented cast who know their stuff. The finale is as polished, boisterous and fun as the rest of the show has been so they’re not lacking in talent. Verity Jones, brand new to the role, does a cracking job as the belligerent Alex, in thrall to her dream in a world that seems to be conspiring against her, even if the high energy dance does occasionally leave her breathless. Her singing is assured. Colin Kiyani has a tough gig as the privileged son of the factory owner who risks everything to seek justice for the workers. Coping with some very long narrative songs, he does a lovely job of warming this audience member’s January-chilled heart. Sia Dauda (Kiki) has a mighty voice, dances like a dream and throws in some acrobatics for good measure. Sasha Latoya (Louise) should have been given a number before the final megamix. And Rhodri Watkins as Andy, the apprentice welder who needs his job, gives an impressively poignant performance on the day that Carillion declared its doors shut.

The band are brilliant. Hats off to the musical supervisor, Mark Crossland. The electric guitar and the sax are particularly sexy. And if you only want to see your favourite songs and the seminal moments from the film, this production has a good crack at both. The dance sequence in which Alex gets drenched is an iconic one, as is the audition sequence. Both are delivered, if briefly, at least with panache. The row of Glaswegian ladies sitting behind me enjoyed themselves vociferously throughout. And we got a nice little singalong to jump up and dance to at the end. A nice antidote to any January blues.

Overall, tonight’s performance let itself down, but they’ll improve for the rest of the run. If you loved the movie, you might not care a jot anyway. There are leotards galore, some excellent dancing and what better feeling than that?