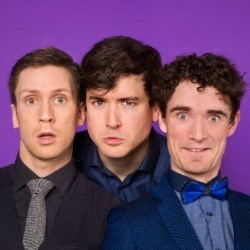 It’s a sign of the times that Foil, Arms and Hog’s springboard to success has been social media. After amassing an obscene number of views on YouTube, and having sold out Fringe runs for 10 years on the trot, the Irish trio are where they belong – in the belly of an upside-down inflatable purple cow. From this lofty position, the lads could well have rested on their laurels, but to their credit they draw attention to such a cop-out within the first five minutes of the show, then promptly proceed to bombard the audience with 60 minutes of riotously funny sketches fresh from the oven.

The opening double whammy of Songs for the Elderly followed by an imagining of the travails of the balaclava salesman are laugh-a-minute knock-outs, with the audience in hysterics from the get-go. Not only are the sketches witty and incisive, but the three performers are clearly masters of their art; they exude hilarity with every mannerism, intonation and affectation.

After such a strong start, it’s not surprising they’re unable to maintain the quality at that level; a sketch about regional accents and another on a motivational speaker in prison are not quite as successful, but still elicit plenty of titters throughout. Indeed, the plateauing of the material is still considerably higher than the peaks of most other acts you’re likely to see in the cow or anywhere else during August.

Audience participation is regular without being overbearing; those poor saps (including, on this occasion, The Wee Review) that are singled out are done so joshingly, with their ridicule only adding flourishes to the general hilarity rather than constituting its primary source. Even the best shows can sometimes stretch your patience with regards to their duration, but the hour spent in Foil, Arms and Hog’s company simply flies by. With a solid hour of sketch comedy cooked to perfection, Oink is guaranteed to have you in stitches.