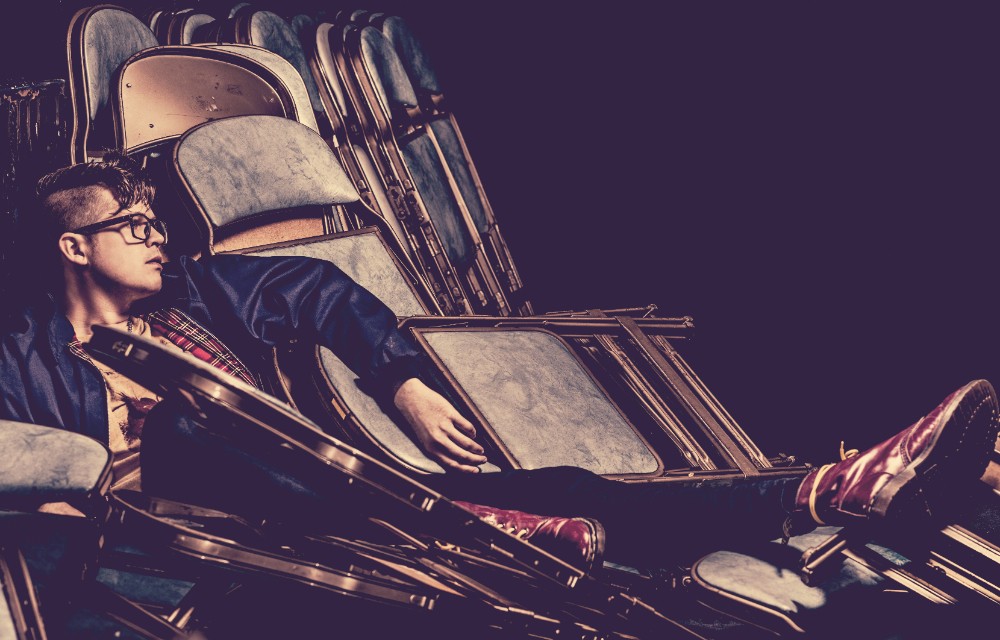 To the back of the stage is a screen showing a video montage of political protests, Princess Diana, Spitting Image, Ben Elton, The Cure and other icons of the 1980’s. This video sets the scene and tone of the show and let’s us know that politics, music and performance are going to play a major role in the next hour.

Frankie Vah is the new spoken word theatre show from performance poet Luke Wright. It is a love story, but not in a traditional sense. This is a story about the love of poetry art, self expression and liberal, left wing politics. Personal relationships are still present though, as Luke takes the audience on a journey through the rise and fall of the punk rock poetry hero Frankie Vah, whilst his girlfriend Eve and his religious father struggle to keep up with his fast paced lifestyle.

Frankie Vah is angry. He is angry at religion, his father, his lack of prospects and the political situation in 1980’s Great Britain. He stumbles on a group of poets who ‘rant’ their words and have more in common with the punk bands of the day than they do with the stuffy old poets of the past. Linton Kwesie Johnson, John Cooper Clarke and Atilla The Stockbroker open the eyes of the young man and inspire him to take to the microphone to present his own perspective on Thatcher and the quarrels that split the Labour Party.

Luke Wright is a force in spoken word. His unique vocal delivery and his ability to spit out verse with vitality and passion is mesmerising. The performance is a tribute the poets of a previous generation and the homage is fitting and authentic. The anger he vents feels genuine and real.  When he grabs the microphone Luke Wright does so with passion, sweat and power and his voice rings true throughout the performance.