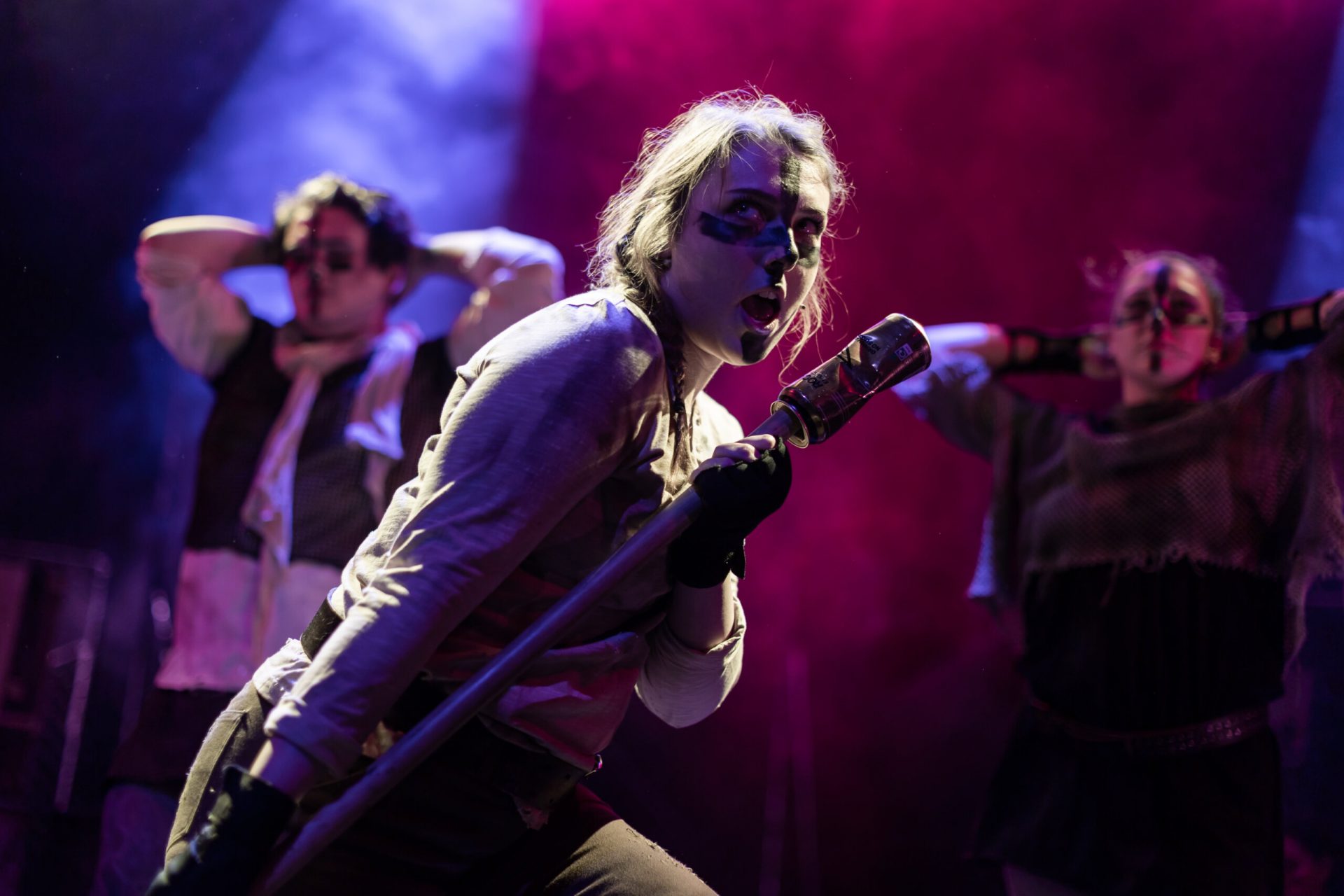 The cast rise to the occasion with infectious energy

Godspell is a little piece of magic and doesn’t get quite the same attention as Lloyd Webber’s poppy Rolls Royce, Jesus Christ Superstar. With music by Stephen Schwartz and words by John-Michael Tebelak (who reportedly dashed off the script as his Master’s thesis), it’s a lovely fusion of rock and hi-energy folky pop. Jesus spends the first half of the show convincing the disciples that putting others first is where it’s at. And the second half of the show waiting for them to stab him in the back (spoiler alert: not literally). Along the way, we have handfuls of parables, the perfect vehicle for the Royal Conservatoire of Scotland‘s Musical Theatre Masters students to stamp their personality all over the stage.

The cast rise to the occasion with infectious energy. Coggin Galbreath has an incredible vocal range and delivers the gospel-esque (fittingly enough) Bless The Lord with precision and panache. Colum Findlay has an equally incredible voice, soaring and sincere in the lyrical All Good Gifts. And All For The Best is all jaunty bowler hats, canes, perfectly enunciated swift syllables and a sliver of the Charleston at the capable hands of Jesus (Angus Bhattacharya) and Judas (Rhian Ferrigan).

The relationship between Judas and Jesus is sketched with particular care by director and choreographer Alexandra Spencer-Jones. Following the initial euphoria of identifying a kindred spirit, Spencer-Jones carefully foreshadows the gloomy unravelling of their relationship, long before the fateful kiss. Ferrigan’s depiction of the betrayal and the calamitous aftermath is devastating: she’s engulfed in grief. Her swan song, On The Willows, is full of a yearning sweetness. Bhattacharya’s Jesus is as radiant as you’d hope the son of God to be, walking a careful tightrope between rage and a consoling, compassionate forgiveness of the Judas who sold him for thirty pieces of silver.

Spencer-Jones’ production lifts the disciples out of Jerusalem and plonks them into a grungy urban waste ground. The opening number endeavours to land a point about philosophers through time, pitching Jesus as the latest in a long line of visionary thinkers and is possibly unnecessary window dressing. But that to one side, the staging packs a punch, the songs still hold all of their magnetic appeal and the band, stashed away behind the set, are having a ball. For all the joyfully uplifting songs, this talented cast plumb the deep emotional depths of this ancient story, making for a punchy, powerful production.