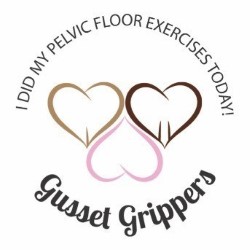 A stand-up show about pelvic health that's so educational it gives a CPD credit.

Much more than just giggling at front bottoms

Pelvic floor exercises are important, and we should all be doing them three times a day. Doing so will give you better health, make ill health in later life less likely, and improve your sex life. That’s the message from Gusset Grippers, and it’s hard to argue with it. Gusset Grippers is comedy, but it’s also educational – and not just “ooh, fancy that” pub trivia educational. If you’re a healthcare professional you can (quite genuinely) cite this show towards your CPD credits.

Elaine Miller is a professional physiotherapist, specialising in (her words) “fanny physio”. She’s on a mission to help everyone, male and female, with their downstairs health, and she’s doing so with a Fringe standup show. There’s no room for the prude or the falsely demure here – we’re straight in with diagrams and props. Miller is careful not to embarrass the audience by asking for personal anecdotes, but equally it’s clear that continence health is something that affects many of us (one in three women, according to Miller’s stats). Her story of the time she wet herself in public is very funny, but also comes with an sympathetic wince. We really do feel the painful loss of dignity and pride that must accompany such an event.

If you have a vulva, you’ll probably learn something from Gusset Grippers. If you don’t, you’ll definitely learn something. This is an hour of entertainment that oscillates between straight stand-up comedy and what is, effectively, a well-constructed and very funny TED talk. It’s celebratory and shame-free, and Miller is a superb host, relaxed and conversational. Within the first few minutes, she has the front row of the audience enthusiastically flinging packets of lube to those of us sat at the back. By the time Poppy the Prolapse Chicken makes an appearance, Miller is our new best friend.

Gusset Grippers is much more than just giggling at front bottoms. There’s a serious point to made, and it’s obvious that Miller is as keen to convince her audience to take their pelvic health more seriously as she is to score laughs. Occasionally, the struggle between those two disparate goals necessitates Miller pulling her punches somewhat, and a few of her jokes are a bit predictable. She has effortless stage presence, though, and the audience in the Rose Theatre Attic love her – and you can be sure we’re all practising our pelvic floor exercises as we file out the door.