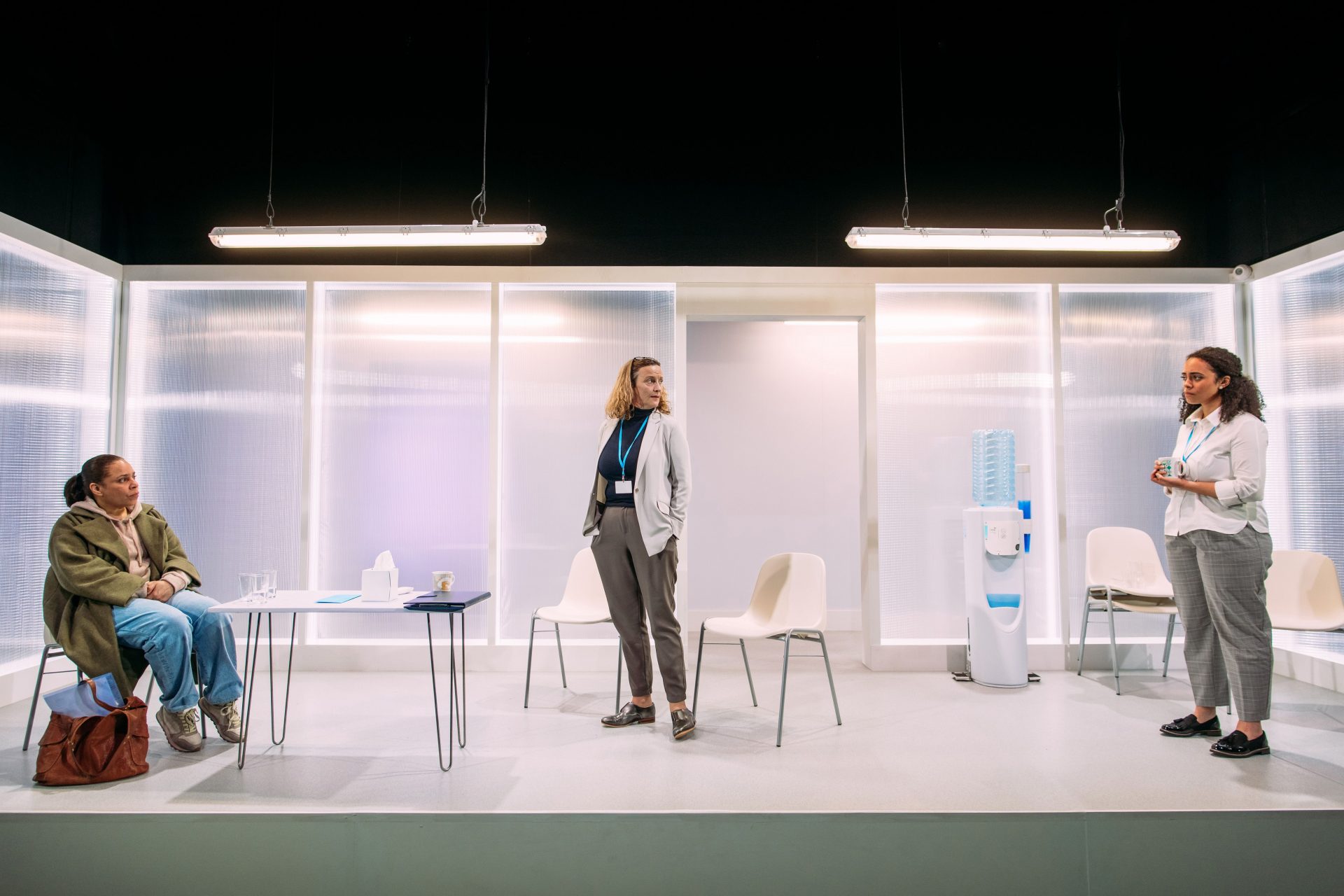 A relentlessly unsettling exploration of trauma and retribution

While promoting the production’s Scottish premiere at the Tron Theatre, very little is given away regarding the play’s premise. We are told that “a crime has been admitted… The victim has a choice to make”. Though this lack of information is certainly intriguing, hang admittedly takes a while to get started. As Renee Williams’ character (the aforementioned victim) enters, Pauline Goldsmith and Saskia Ashdown – two unnamed representatives for an undisclosed agency Williams has come to – try to make her feel comfortable. However, the repeated questioning and mix of unfinished or hanging sentences quickly get on both Williams (and the audience’s) nerves. In particular, Goldsmith’s patronising tone and her incessant need to fill the silence makes for an intentionally uncomfortable atmosphere that is only going to get more unbearable.

There is an excellent dynamic between the three performers. Despite their feigned compassion for Williams and her situation, Goldsmith and Ashdown’s repeated slip-ups strike an excellent balance of humour and tension. Williams is exceptional throughout, simmering with rage and refusing to placate the women in front of her. Though reluctant to appear vulnerable or unsure, the pain in her voice as she cryptically recalls her trauma and its profound effect on her family is gut-wrenching.

Though everyone is reluctant to give much away, there are some hints as to the subject matter of hang. When the purpose of the trio’s meeting is finally revealed – or more specifically, the decision that Williams’ character has to make – tucker green revels in the Black Mirror-esque nature of her work. As Ashdown explains the various factors there are for Williams to consider, the stark blend of morbid details and gallows humour delivered so nonchalantly is affronting.

Director Kolbrún Björt Sigfúsdóttir is not afraid to home in on the play’s disconcerting nature. There are often moments of uneasy silence, particularly as Williams makes her decision official by filling out scores of paperwork. Amplifying this unsettling atmosphere is Alisa Kalyanova’s set design paired with Benny Goodman’s lighting. Clinical in nature, the strobe lights, white floors, and plastic chairs are all cold and unwelcoming. As Williams becomes more agitated, the glitching lights and Tom Oakes’ subtle but destabilising soundscape intensify the situation, and it seems to only be a matter of time before Williams implodes.

It’s perhaps no surprise that tucker green leaves her audience hanging, ending the play with a striking final image but many unanswered questions. Though it may seem frustrating at first, it’s a clever move to encourage the audience to fill in the deliberate gaps. After all, there is nothing more terrifying than our own imagination.