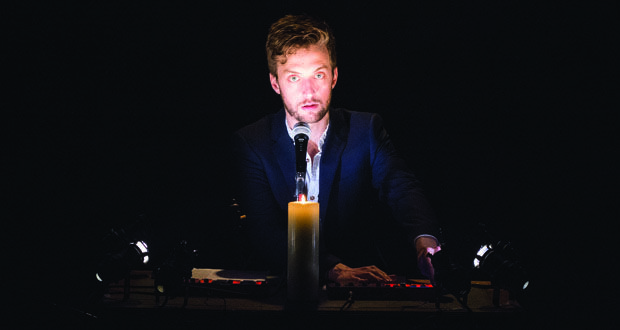 One man takes on the world

If one good thing has come out of the nightmare that was 2016, it is the glaring realisation that humanity is intent on destroying itself. Glaswegian actor and writer Kieran Hurley seizes on this theme in his one-man show and turns it into something both beautiful and horrifying, one syllable at a time.

Set in a room with only a table, a chair, two synthesizers and a microphone, Hurley forces us to focus on his posture, his face, his words – and the meaning they convey so effectively. He jumps between a betrayed teenager, an executive who never sleeps, a cocaine-addicted celebrity, and a man in danger of losing his job, with unwavering confidence and ability. Every inch of his performance is engaging without being aggressive, transforming himself from withdrawn to enigmatic and back again in seconds. He understands the impact that supposedly innocuous details can have, and uses them accordingly; there are many points where all the audience hears is a ticking of a watch or heavy breathing, heightening the atmosphere which never falls flat during the performance.

However, that is not to suggest that lighting and sound are redundant; they merely accentuate the intensity of the script and the energy of Hurley, expressing the mood of the different characters as they are overtaken by mania and desperation in turn. The stage is occasionally flooded with the blinding light that the audience take to be a signifier of the apocalypse, while a yellow glare transports us to a school bathroom and a bluish tinge places us in a hospital. Combined with the sound motifs which range from oppressive white noise to music reminiscent of a mundane video game, Hurley makes our society a recognisable dystopia. By directly referring to the audience, he challenges us to properly look at the people we are and the way we interact with others and the world around us.

Of course, the impending doom of humanity is not new subject material. Indeed, it has been touched on time and time again, in varying contexts and eras. Perhaps, though, in this shifting political climate, it is more relevant now than ever before. By cleverly weaving in present-day issues amongst the problems that have plagued us as a race forever- be that heartbreak, resentment, or just a desire to be heard- Hurley doesn’t simply re-tell a story we’re all painfully aware of: he makes it his own.