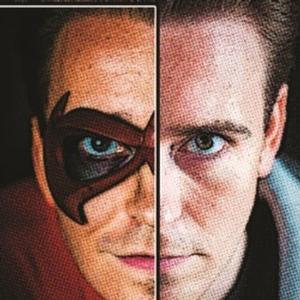 A lighthearted exploration of serious issues which entertains without trivialising.

"A superb piece of theatre"

One man shows are always a tricky minefield to navigate, as a single person tasked with holding the attention of an entire audience for a whole hour is no mean feat. In Hero Worship, Kenny Boyle not only successfully elicits laughs, empathy and pathos from the 30-strong crowd for the duration of his show, but does so while combining the niche topic of comic book superheroes with the even more niche area of mental health.

Often productions such as this which try to combine the heartfelt with the humorous can come off as laboured or hackneyed, or even worse, trite and simplistic. While the 60 minutes does limit Boyle’s exploration of mental health issues significantly, he dips enough of a toe into the topic to just about justify the show’s billing. The issue could seem a little glossed over, but such light treatment is far preferable to compromising the quality of the show by getting too preoccupied with what is a very slippery subject, and in the end his handling is more entertaining than enlightening – but that’s perfectly acceptable (and perhaps preferable to many) at the Edinburgh Fringe.

The medium of his show is even more impressive. He mixes eloquently-crafted spoken word rhymes with a touching (if a little formulaic) story, sprinkling the combination liberally with pop culture references and making the sort of self-aware observations that won Deadpool so much acclaim. An intimate knowledge of the graphic novel world will certainly enhance the production but is not imperative to its enjoyment, since the journey Boyle takes us on is a universal one.

At times the cleverness of his wordplay threatens to overwhelm the story, with his delivery becoming tongue-tied on one occasion and forcing the audience to stay mentally agile in order to keep on top of his verbal somersaults throughout. However, it’s the opening day of his run and initial teething problems are to be expected. The criticisms are only superficial and there’s nothing that can’t be ironed out through practice and refinement.

In terms of telling an age-old story through new and innovative means – while opening up a subject that can be difficult and intimidating to a wider audience – Boyle’s show is a superb piece of theatre. Equal parts comedy, drama, action and romance, it’s a down-to-earth and relevant production which explores the secret someone inside of us all. Regardless of whether it’s a show we deserve or need, it’s certainly a show we all want at the Fringe.