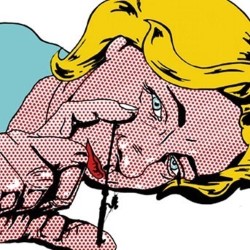 A self-described ‘story in mundane suburbia’, Hopes and Dreams follows a very ordinary Australian couple trapped in a marriage that’s gone sour. We meet Marion first, alone in her kitchen, sinking endless glasses of cheap white wine; later we hear from Douglas, whose less-than-stellar sales career makes him the breadwinner of the family. A son is mentioned too, and there’s a birthday party to plan, but it’s clear the love faded from this marriage a decade or more ago. And so it goes on, day after day and scene after scene, the most everyday of tragedies.

At first, you might wonder what the point is of telling this story – of showing us the tedium of a patently failed marriage, where both partners are dislikable and neither has the gumption to leave. But there’s more to the narrative than at first appears. Slowly, we discover more about what caused their relationship to fracture, and details which at first seemed incidental or petty suddenly acquire a troubling new meaning. We’re kept guessing till the very last moment about which of the warring partners we should believe, and – though the exposition-heavy opening scenes did wear on me a little – I was thoroughly engrossed by the end.

It’s a delicately poised script from actor-playwright Bernie Maxwell, who brings a similar balance to his performance as Douglas. Initially, as the script demands, he’s a muted presence, but as time goes on and secrets are revealed he runs a gamut of always-credible emotion. Unlike Marion, he hasn’t given up on the marriage, and there’s a haunting self-delusion to his attempts to save it – as well as to the way he defines his own worth around his mediocre career.

Romina Tappi, as Marion, perhaps has the more demanding role: embittered, disdainful, at times overtly cruel. But we come to learn that the spitefulness is a front for something we might sympathise with, and to grasp why (as Marion puts it) she continues to ‘do this to herself’. Tappi, like Maxwell, manages this transition well, leaving us with the impression of an emotionally broken woman – whose response, tragically, isolates herself even more.

There is a measure of hope for them – one scene gives us a brief glimpse of the companionship they once shared, and occasionally find again – but there is no true redemption to be had. In the end, their mutual dependency is revealed to have hideously complex roots, and the script is wise to eschew an overly simplistic ending. Overall, Hopes and Dreams is a challenging play, which yields its secrets slowly… but offers plenty to think and wonder about by the time the curtain falls.