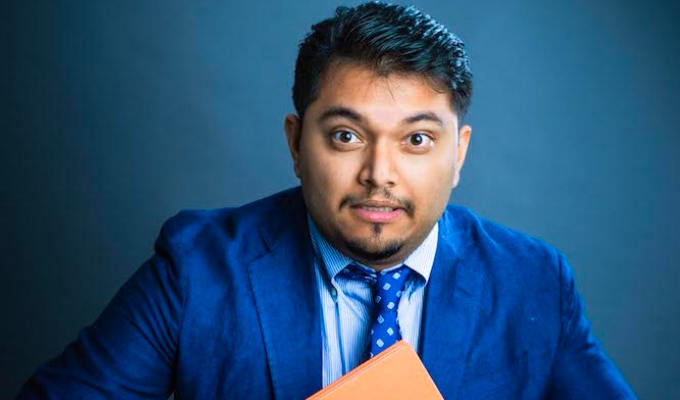 Intelligent and hugely varied hour of excellent stand-up, delivered at a screwball pace

Taking in the personal and political, and the intersection between the two, his energy level is relentless

Even Sid Singh seems baffled by the sheer volume of people cramming into the Cabaret Voltaire basement on a Saturday afternoon. The voluble American spends around fifteen minutes marshalling his troops into various nooks and crannies, and even a bench on the stage itself. ‘You know I was only half full yesterday?’ he chides. ‘You could have saved yourselves a lot of trouble!’ He’s clearly delighted though, and it’s a lit touch paper to a cannonball of a performance.

Illegally Funny ostensibly deals with Singh’s side line in refugee law (his primarily a stand-up), and a significant legal victory Singh, as part of an organisation helping refugees, won against the Trump administration. But this is but a sliver of the many subjects he deals with. Taking in the personal and political, and the intersection between the two, his energy level is relentless. One is left a bit breathless, but it’s worth keeping up for the gems of wisdom among the incredibly high gag rate.

Particularly salient is his simple but self-lacerating assessment of left-wing politics vs right-wing, particularly in terms of the US. Why do the left constantly lose? ‘We’re correct,’ he says, unequivocally, ‘But we’re annoying.’ Evil, we can deal with. Boris Johnson he says, applying this formula, got forced out once he became annoying to too many people. Singh may protest – perhaps with a slightly forked tongue – that he’s actually a dumb guy; but he has way too solid a grasp on the political landscape, and a mastery of his material for us to believe that. He may have a curiously optimistic, some would say distinctly American, view of the world and the communal power of people to make a difference, but Illegally Funny is nothing if not a strident and intelligent show.

Yet, what may be the highlight of Singh’s set is saved for the end: the reason why he believes his dad is a genius. Perhaps one of the few moments where Singh slows things down a touch, it’s a twisty and hilarious tale of immigrant opportunity. It’s a fantastic bit of storytelling about an unusual, by any metric, life. It’s strange, rich, and funny enough for a show on its own terms. Come on Sid, next show; ‘Bad Dad’. How about it? It’s pretty certain those guys on the bench would come back for that.