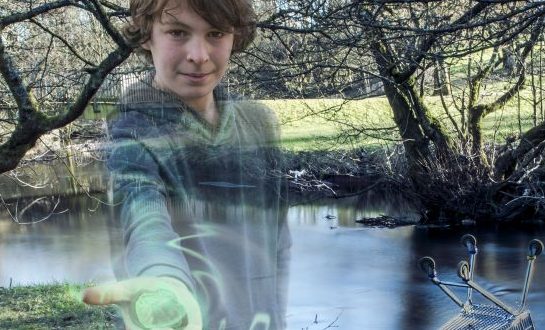 Terra Incognita give a sensitive and imaginative exposition of the life of young carers.

Reminds us of the good theatre can do

No curtain, no barrier. The Highland audience is dispersed across the Onetouch Theatre at Eden Court: families, couples, a sizeable flock of teenagers in the front two rows – but plenty of empty seats too. The set, geometrical shaped storage boxes (echoing the shape of a paper chooser), medical paraphernalia and a few well-chosen set props, is lit in a cold pink and blue wash – while jagged burst of electronic pop and hip-hop render the atmosphere a little on edge.

The appearance of an electric guitarist donning sunglasses seems a little incongruous at first – after all, Terra Incognita’s Invisible Army has been described as “a documentation of the experiences and imaginations of a group of young carers”. But the instrument’s versatility adds to the play’s effectiveness, even if guitarist Dan Beesley’s speaking parts, minor though they are, lack the conviction and energy so amply supplied by two principal actors, Michael Abubakar and Rosalind Sydney. Both actors’ performances dazzle throughout, moving between in-role dialogue and Brechtian narration with ease.

Invisible Army is not always an easy watch; the adjustments (from dialogue to narration to movement and comedy) force the audience to experience something which young carers are constantly required to do: adapting to an ever-changing reality.

But the success of the production lies in the simple: an unfinished sentence, leaving the worst to the imagination; a hollow frame used as a mirror in which main character Robbie has disappeared entirely; a plain string of lights to represent the chasm into which Robbie sinks when he can no longer cope; well-timed silences; and, of course, the stunning movement sequences in which Abubakar is pulled into different directions, seemingly completely out of control.

The play deals with challenges as mundane as unfinished homework and school bullies, but also addresses the glibness of “positive thinking” and the great effect that a small unkindness can have on the vulnerable. Audience participation is handled gently and humorously and the countdown to school-time provides a guiding structure, signalling each return to reality.

This was no “perfect” production, but Invisible Army’s short, sensitive and imaginative handling of an important and often forgotten issue surely reminds us all of the immense good that theatre can do. For that alone, Terra Incognita deserve a full house – and probably a standing ovation to boot.