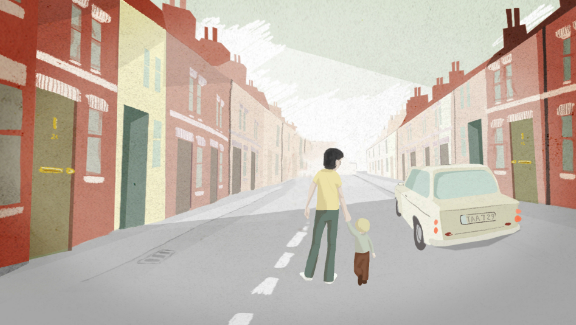 Irene’s Ghost is a directorial debut from Iain Cunningham and chronicles a very personal exploration. After his mother died when he was three, Cunningham grew up knowing only vague details about her life and death, so set out to film the conversation he opens up with his father and extended family about Irene. The resulting documentary is captivating, tense, intimate and incredibly moving.

Intermittent animated scenes – almost like children’s sketches or picture-book illustrations – are used throughout and establish a child-like sense of wonder and naivety from the outset. The use of photos and found items also decorate the investigation as it unfolds and open portals into memory and shared histories. Family members are warm and personable and their low-key interviews bring humour and tenderness to the film. It is interesting that they are almost unanimously female and Cunningham’s father clearly finds it difficult to talk about his late wife. One scene documenting a phone call between father and son both amuses and highlights the traditionally masculine difficulty in opening up about emotions and loss.

Shots of the director’s own young daughter, Isla, provide comic sweetness, but also forge the themes of parent-child relationships and genetic lineage. Cunningham’s chats with Isla also help to elucidate some of the issues and questions he must have grappled with while growing up, and the film becomes an exploration of memory – its importance and its precariousness.

What the filmmaker eventually uncovers must presumably be both freeing and traumatic, and it becomes clear why so much has been kept from him as a protective measure. However, the film points to a universal issue, as well as this personal one: that mental health is still stigmatised and seen as something shameful, not to be discussed. A final interview with his dad – who, well into filming still can’t bring himself to detail events from the past – is heart-wrenching and pushes the film to an intensely emotional close.

Despite the premise, Irene’s Ghost is not ultimately about the grimness and trauma of death, but the value of life, the connections we make and keep, and the importance of commemoration. It achieves an incredible feat, counteracting the stifling of Irene’s final years with a new legacy for her – one that will linger long in audience members’ minds.