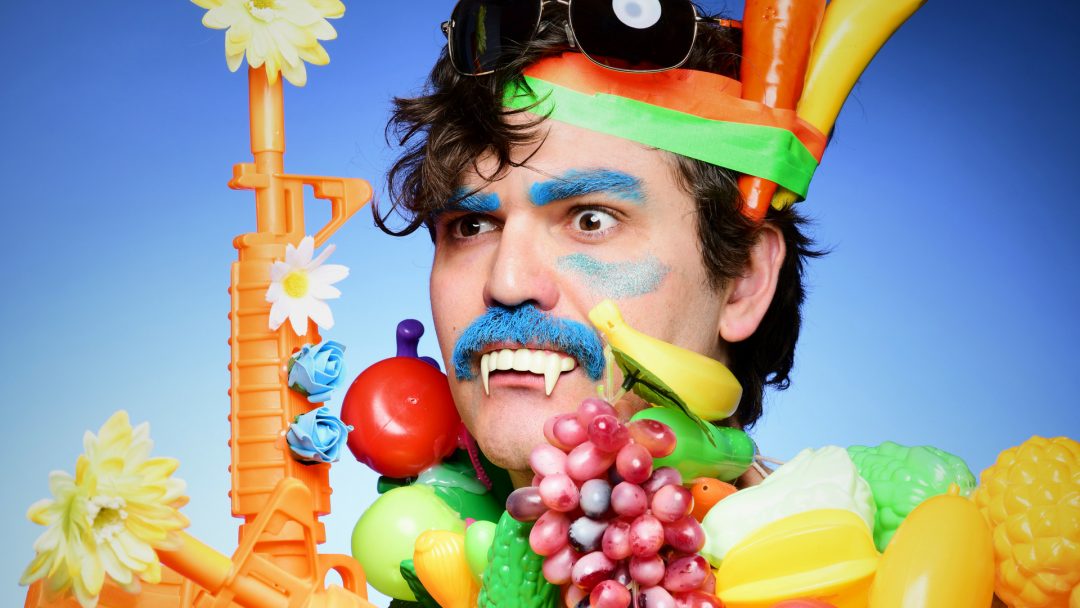 John-Luke Roberts
All I Wanna Do Is [FX: GUNSHOTS] With a [FX: GUN RELOADING] and a [FX: CASH REGISTER] and Perform Some Comedy!

A love-letter to surrealism

John-Luke Roberts – bright blue moustache and big wild eyes, primary colours and flailing limbs – leaps onto the stage and directly into top gear. He’s animated this year, even by his standards, with a manic grin and an energy that never lets up. All I Wanna Do Is [FX: GUNSHOTS] With a [FX: GUN RELOADING] and a [FX: CASH REGISTER] and Perform Some Comedy! (a superbly preposterous title destined to break the carefully designed page layouts of review sites all over the web) is ostensibly a reaction to a single piece of criticism that Roberts received for his previous show. In fact, it’s a love-letter to surrealism that is densely packed with satire, social commentary, sketches – and, yes, many silly voices and idiotic props.

What initially appears to be a sequence of increasingly ridiculous character vignettes is slowly revealed to be part of a clever, larger narrative. Everything’s been carefully considered, and the beats of the show are spot on. Every gag lands, and every laugh has been lovingly crafted. It’s layered with callbacks and smart repetition, but manages (just about) to avoid coming across as smug or self-satisfied. All I Wanna Do … might alienate an audience looking for easy jokes and mainstream tropes, but the audience at Assembly Studios tonight love every moment, and it’s not hard to see why. This is the very best of live alternative comedy, offered by a performer who’s completely comfortable with who he is as a comedian and as a clown.

Roberts is too good a comic to ever rely on daftness for daftness’ sake, and this is all building to a conclusion – a conclusion which, of course, he repeatedly lampshades and undermines throughout the show. He’s studied and rehearsed, and very disciplined. Whilst there’s a looseness to the show occasionally, Roberts never allows himself to veer to far off his preplanned trajectory. The pace and power of the show are crucial to success of its denouement – and succeed it most emphatically does. Roberts has the ability to make an audience trust him utterly. We’re blind to where he’s leading us, but we’re sure he knows the way and it’s a joy to travel with him.