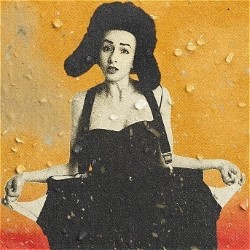 Ingenious clowning that spans everything from slapstick to heartfelt, and from childish silliness to the crudest of adult humour

One of the most challenging things to do in any performance medium, but especially in clowning, is surely to move directly from comedy to real emotion. It’s a trick-shot that Julia Masli pulls off more than once during CHOOSH!

A clown show, by its nature, relies heavily on audience investment and so can often start on the back foot. From that point of view at least, Masli has struck lucky tonight. Her audience is immediately on board, enthusiastically participating in everything that she offers. It helps her a great deal, but there’s no doubt that she’s very capable even without it. She has an intense understanding of her own physicality, and uses it to create an entire world on the Assembly Roxy stage. Her use of props is occasionally ingenious, and there are several occasions in which she surprises us with a visual gag that’s as funny as it is daft.

She does speak, but sparingly, and only when necessary to move the plot along. CHOOSH! tells the story of Masli’s clown emigrating to America, and the experiences (good and bad) she has when she gets there. Various audience members are roped in along the way, but Masli is always in complete control.

Her look is absolutely classic clown, but assuming this to be an old-fashioned clown show would be a mistake. CHOOSH! spans everything from slapstick to heartfelt, and from childish silliness to the crudest of adult humour. Sometimes it feels as though the prop came first, and the story element was reverse-engineered from it. Likewise Masli’s transitions from one set piece to the next can be clunky, making the overall show feel slightly less polished than it otherwise would.

She occasionally gives a microphone to audience members, which is risky ploy. Tonight’s audience though, absolute devotees of the fiction, wouldn’t dream of disrupting Masli’s narrative with anything offensive or stupid. When her character sets off to the big city to make her fortune, and asks some advice from her audience ‘mother’, the response is absolute sincere and actually quite moving. When Masli parrots it back later at her most vulnerable moment, it’s unexpectedly sweet and genuine. Had her the response been flustered or silly, Masli’s subsequent recitation of it would probably have garnered a big laugh. As it is, tonight, the laugh doesn’t come but it’s a worthwhile sacrifice for a moment of real beauty that bth audience and performer have somehow created together. It’s a perfect payoff for the risks that Masli has taken in crafting a show in which the audience are such a crucial part.