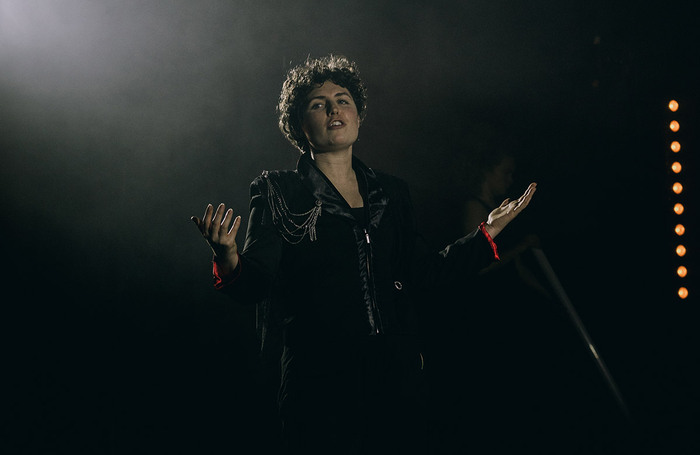 In this stripped-back performance of Shakespeare’s Julius Caesar, Company of Wolves’ experimental style allows the bard’s words to shine through.

The simple auditorium of the OneTouch Theatre at Eden Court is ideal for this company. Influenced by artistic directors Ewan Downie and Anna Porubcansky‘s time with the Polish Laboratory Theatre, Company of Wolves relies on the actor and their relationship with the spectator, rather than extraneous elements such as costume, make-up, or set design.

Indeed, this performance of Julius Caesar tries to dispense with finery. The actors are dressed in black, with hints of red, as though ready to rehearse. To illustrate a new character, a jacket or cloak is simply added. These additional costumes, designed by Alisa Kalyanova, have beautifully constructed folds and drapes – elevating some into works of art. Casca’s jacket with a half-circle of pleats is especially striking. As for the set design, its minimalist nature allows for only some lights, red stools, a set of wheeled platform stairs, and a large statue of Venus de Milo. Though a statue could ably represent Caesar, such an iconic sculpture feels incongruous, while the metal stairs seem awkward when rolled into different positions.

However, these minor qualms are quickly forgotten as magic is created onstage. Shakespeare is often accused of being difficult to understand but not this time. The actors lift the language to its pinnacle; the arguments are clear, the great speeches are as new. Is Julius Caesar written as monologue heaped upon monologue, one great speech after another? In this production, it appears so and yet is the better for it.

As Brutus argues against his better nature, trying to convince himself to commit murder, elsewhere Cassius is twisting and plotting. Again and again, familiar phrases are spoken with fresh vigour. Esme Bayley stands out with her sensitive, conflicted portrayal of Brutus, while Lawrence Boothman’s Cassius embodies Caesar’s description of a man who thinks too much – “such men are dangerous.”

The other actors take turns representing the mob who cheer or jeer the speeches. They chant for Caesar, then for Brutus, then Mark Anthony. The audience are invited to agree with the throng who change their opinion depending on the orator’s skill. Apart from the speeches, there is one particularly touching moment, when the innocent poet Casca, having the same name as a plotter, is butchered by this bloodthirsty rabble.

Five superb actors – ably co-directed by Downie and Brian Ferguson – make Julius Caesar eloquent and pertinent. These exponents of ‘poor theatre’ strip away non-essentials to reveal a play about political power and the failure of violence as a solution. This is Shakespeare at its purest, with a bare stage and talented actors allowing the language to paint the picture.