Kurt Vile doesn’t talk much between songs (and nor do his Violators). There are a few whoops issued from behind his curtain of hair, some generic mumbled encouragements to the crowd. It’s only when his hometown of Philadelphia comes up that he seems to pique his own interest. “They’re from Philadelphia,” he explains excitedly, thanking his supports Meg Baird and Mary Lattimore. “Well, they live in California now, but that’s where I know them from. That’s where I’m from, too!” He doesn’t really speak again after this, just rattles through a load of songs from his last few albums: Smoke Ring for My Halo, Walking on a Pretty Daze, b’lieve I’m goin down…, and this year’s Bottle It In. The many guitars he switches between are, I think, meant to do the talking.

At a recent concert in Edinburgh, Mark Kozelek cited Kurt Vile at the head of a list of things he likes about Philadelphia.  Philadelphia is a sort of Kurt Vile-land. There isn’t much else (apart from the steak sandwiches in hoagie rolls which hang emblazoned on his T-Shirts in the merch stand) that is readily associated with it. Vile has become a sort of provincial king, and his Philadelphian charm lifts the concert here in SWG3, which is in lots of ways unremarkable. He moves through a lot of songs which sound a lot like they do on the records.

There are highlights. Peeping Tom which he plays alone, slightly fumblingly – the vulnerability of it is refreshing. And Bassackwards, from the new album, which is the best one of his characteristically slackerish jams, and does draw you into the intended psychedelic spin. And Cold Was The Wind, which is another new song, but weirder, untypical. The whole performance is sustained by the laid-back charm, though, which settles expectations and lets you know that he’s just going to play a ton of music as best as he can and it’s going to sound great. It distracts you from the occasional mistakes, and the moments when the guitar jams go on just a little too long. The music isn’t really suited to long tours, and rigid curfews, because the songs are so long, and can be samey, and they’re indulgent. It’s hard to imagine KV rushing about Europe on tour when the songs themselves take so long to get anywhere. It’s music to be listening to while lying on the floor. It would be nice to hear it in some dusty Philadelphian park, with a steak hoagie washed down with a little can of Pabst Blue Ribbon, but this will do fine too. 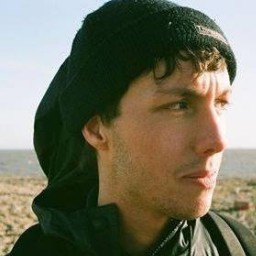