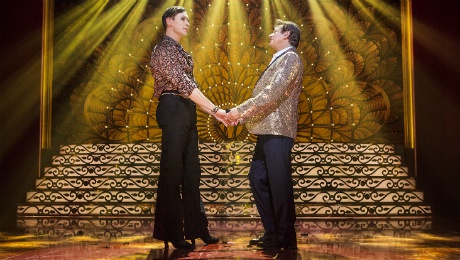 A welcome, fantabulous spritz of Shalimar for a drab world

In a St Tropez drag club Albin (John Partridge) is the undoubted star. His life partner Georges (Adrian Zmed) runs the club and acts as emcee. The dancers are the Cagelles, a riot of bugle beads and ostrich plumes, who head toss and high kick like the best of them. In the opening number there is a line – ‘we are what we are and what we are is an illusion’. The message is that more of what we present to the world is fake or fudged than we care to admit and that striving to be true to yourself is what, in the end, matters most of all.

Albin and Georges, unsurprisingly, have embraced their gayness. They live above the club in an apartment full of paintings, a leopardskin chaise and a full-size nude male statue whose member acts as the light switch. After 20 years living together there are few secrets between the couple but something’s up. ‘Pity me. Betray me. But don’t lie to me, Georges,’ says Albin.

Georges’s son Jean-Michele (Dougie Carter) is the result of a one night stand some 20 years before. The mother disappeared and has hardly been seen since and Jean-Michele has been raised by Georges and Albin. Now the young man has fallen in love with Anne (Alexandra Robinson) whose father – a leading light in a back-to-family-values political party – wants to meet the parents of his daughter’s intended. On- and offstage, however, Albin is all slipper-satin and Shalimar. So while the son can straighten up the apartment (out with the statuary, in with an enormous decorative crucifix) making Albin less ‘obvious’ is an altogether trickier (and more hilarious) problem. It’s too big an ask to have Albin not attend a dinner for the parents – not someone who has put themselves last so their adopted son can be first. What to do?

An attempt to make Albin John-Wayne-macho comes apart, so instead he drabs down and, looking a tad like a mumsy Theresa May, pretends to be Jean-Michele’s birth mother. Will the right-wing father be fooled?

There’s business with a black maid with attitude (Samson Ajewole) and the loyal restaurant owner (a tantalising guest appearance from the great Marti Webb). The songs are by Jerry Herman and the book is from Harvey Fierstein so the writing is snappy and funny throughout. The best-known number I Am What I Am provides a moving showstopper and in another song there’s the mantra ‘the best of times is now, for tomorrow, who knows?’

The adaptable set (Gary McCann who does the glittering costumes too) looks like some dreamland Barbie mansion. If there is a weakness in a plot about going to excessive lengths to hide your sexuality in the face of a reactionary bully, it is certainly because the play is nearly 35 years old and, hey, we’ve come a long way, baby.