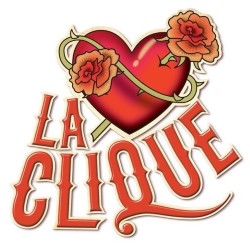 A treasure trove of delights awaits in The Famous Spiegeltent.

The award-winning La Clique cabaret show is firmly entrenched in the Edinburgh Fringe schedule and after some experimentation with a slightly different format last year, this year they have returned to the traditional style and it thrills and delights The Famous Speigeltent audience, many of whom return to see La Clique year after year.

Vocalist, Becc Sanderson, is the first of the cabaret acts to take to the circular stage which is strategically placed in the middle of the floor so that the crowd surround the acts and feel as if they are right there with them. Sanderson sings soulfully, setting the crowd up for a wonderful night filled with awe-inspiring tricks and stunts, all performed to the mellifluous sounds of the house band.

Those lucky enough to grab a ticket at this often sold out show are then treated to a unique performance by burlesque dancer and comedienne, Sophie Zucchini, spectacular hula-hooping by Scotsman Craig Reid, puppeteer expertise from Stephen John and André-Anne LeBlanc, comedy and tricks with compere for the night Paul Zenon, trapeze skills from Elke Uhd, and aerial skills from some of the best in the business. It is a veritable treasure trove of delights and all topped off with the appearance of Gerry Connolly as Her Majesty the Queen decked out in a special ‘Bring on the Brexit’ coat and who completes both speech and song which have people roaring with laughter.

Queues are so long and tickets snapped up so quickly for La Clique because you get to see so many talented individuals up close and personal in the space of just two hours. It is an exhilarating feel-good format and having been a fringe regular for so long it is worth getting down to St Andrew’s Square to see why.