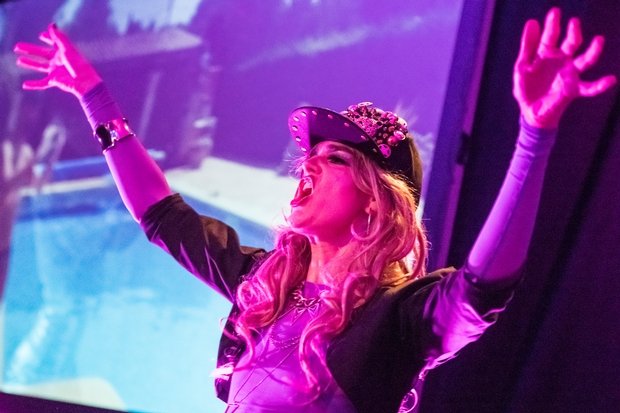 Mixing the traditional format of a German cabaret with a light sprinkling of avant-garde performance, Late Night Ceremony is a curious beast. Featuring a range of different performers showcasing their material with no particular overriding theme, it makes for a strange experience for the audience.

It opens with Polly, who begins to deliver a monologue to the audience, initially accompanied by Harry on a manually operated organ. At times laying on the ground, her tone is conversational as she recounts her time as a sex-worker and goes into extensive detail about an awkward one night stand with a hockey player. This is peppered with throwaway lines veering wildly between the amusingly mundane to full-blown existential crisis levels of ‘we are all nothing’.

From here Brian takes over, creating elaborate songs by layering noises he creates with his body. It’s surprisingly hypnotic, almost like a shamanic chant, which leads to the ceremony itself. Up until this point I’d been intrigued by the performers if not a little confused by proceedings, but after a long build-up this section felt falsely profound and was a little disappointing.

There’s a lot of earnestness for the near midnight time slot, which is either brave or optimistic considering the material, and means this show is disupted by festival-goers who have enjoyed one too many Tennent’s beforehand. Although the ideas touched on by the performers are engaging, some parts descend into cliche. A stronger theme running throughout may have been better as it felt, at times, like a loose collection of unconnected performances.

It’s edgy and raw but not always in a good way. This is not a show for the fainthearted, but may suit broadminded audience members looking for something a different.