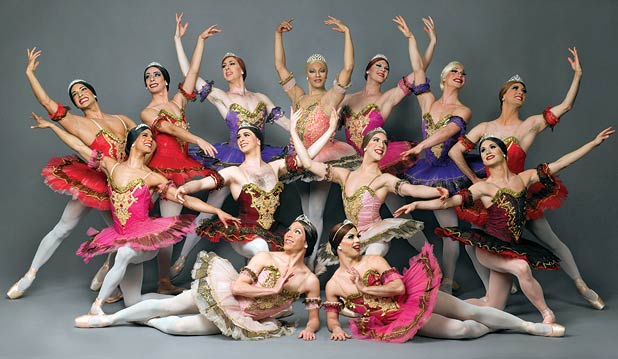 The Trocks hit the town in Inverness on a snowy night. The usually conservative audience give these fabulous male dancers a standing ovation as they trawl through the classical repertoire with mischievous spoofery. Clad in tutus, leotards and full slap including the famous fluttering eyelashes, they perform cod versions of well-known divertissements and extracts from well-loved ballets.

Espousing the classic format of a three-act ballet, the programme is a treat for ballet aficionados and comedy fans alike. Starting with the familiar announcements of cast replacements heard at major opera houses, they set the scene with outrageous principal dancers such as Marat Legupski and Sonia Leftova, to name a couple.

Les Ballets Trockadero de Monte Carlo formed in New York in 1974 and pay homage to the legacy of the classical tradition with a playful twist. Men can dance en pointe and perform the full range of the classical repertoire with the same understanding of technique and form and retaining the spirit of the original choreography, meantime taking a sly dig at the ballet world and its foibles.

In this programme, Act One starts with their signature work, Les Sylphides, and the divine score by Chopin. There can be no one who is not familiar with this music and the vision it conjures up – a hapless Prince wandering around the stage, and a corps de ballet evoking a mysterious world of danseurs in mid-calf tutus and tiny fairy wings. Thanks to the perfect execution and hilarious interaction, the audience immediately cotton on.

Act Two opens with a tribute – or is it? – to Merce Cunningham and John Cage. Patterns in Space involves live music played with aplomb on a rag bag of objects and contemporary dance with the trademark moves of both modern icons instantly recognisable. This could almost be an original performance if it was not for the sly asides. Paired with this is a little-known work (so they say) – La Trovatiara Pas De Cinq. It’s a wonderful spoof of the traditional opera diversion of gypsies, dagger wielding pirates and an exotic prince, choreographed to include all the familiar content. An unsuspecting audience is led to believe that Verdi commissioned it himself. The result is technically brilliant and hilarious, followed by a special guest performance of Pavlova’s feather shedding Dying Swan.

Act Three is a return to the company’s choreographic inspiration Petipa, with Paquita, first performed at the Paris Opera in 1846 and exported to St Petersburg with music by Minkus. This is everything you expect from the Russian tradition and showcases the consummate skills of the company in every way. There are comic asides and timing and a stand out performance from Nina Enimenimynimova in variation five. The thirty-two fouettés are a lesson for any aspiring traditional ballerina, and there is miraculous spotting and pirouettes.

The final curtain comes down on a tribute to New York, New York and you can’t finish better than with a kicking line up. Magic!