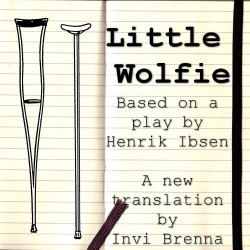 A modern update of Ibsen's classic

The most memorable aspect of this play is the eerie doll that stands instead of an actor as the character of Wolfie. This captures the otherness of the crippled boy; his alienation from the children who lead a “normal life”. His inhumanity also emphasises how, as a character, he’s not really there at all. Like the actors use the doll, the other characters in the play use Wolfie as a prop. For Alfred, he’s a second chance at success; for Rita, he’s the obstacle between herself and her husband.

At times, the acting is slightly static, but it loosens as the play progresses and successfully communicates the characters’ internal tragedies. Their manipulation of the puppet is also a triumph, as the movements and reactions to other characters are believably human. Another highlight is the young actor who plays Peter, who seems natural in the skin of his passionate character.

The director’s use of the set was elegantly simple and intelligent. On-stage costume changes and visibly altering the clock allow the audience to understand the progression of time. The ending was particularly well done, as props were used to their full advantage to emphasise the theme of transformation, which was constant throughout the play.

Whether you approve of the changes or not, adaptations such as this one keep older classics fresh and interesting. It stops them from decaying. As Little Wolfie shows how we must learn to share our loved ones, this adaptation displays the benefits of sharing the old with the new.