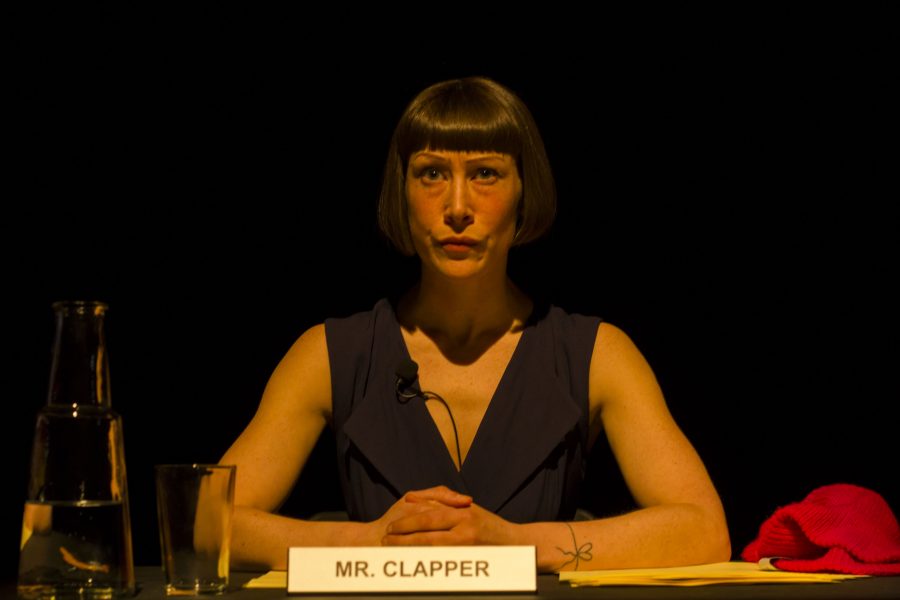 A Machine They're Secretly Building

Read a quick synopsis for A Machine They’re Secretly Building and you might infer that this is a dystopian thriller focusing on two fictional characters fighting a mysterious totalitarian force. From the play’s opening projected text, though, we realise this dystopian setting is anything but imagined. The narrative is not a fabricated construct – it is a living historical chronicle of the evolution of surveillance since World War Two. This is non-fiction.

But don’t expect a history lecture or a mere timeline of dates and facts. The stark stage and simplistic props are deceptive. Bold text, excerpts from leaked intelligence documents, words from Edward Snowden and newsreel clips make A Machine… an immersive experience that pulls back a curtain on organisations like the NSA and GCHQ and confronts the audience with startling truths.

The piece is narrated by two everyman figures who adopt roles of various politicians, historians of the future and ordinary citizens, the actors flitting between each persona with ease. To-camera confessionals act as a magnet, drawing us in and at various points the actors don pink balaclavas – at first symbolic of our government’s surveillance-oppression posing under a soft guise; we should be convinced that our every online move is being recorded “for our own safety”. As the show moves through history towards present times, though, the balaclavas adopt a secondary representation, probing us to question whether or not extremist terrorism is what we should really be afraid of.

A Machine… brilliantly pulls us in as we hurtle towards the climax, bombarding us with arresting revelations and the growing realisation that we’re not really watching theatre at all. What we see and hear on stage is a masterfully devised mirror.

At the end of the show, we haven’t witnessed a character arc or revelled in a twist ending. We are being called to arms. A Machine… is an alarm clock, waking us up. Leaving the theatre, you might think twice about turning your mobile back on straight away.