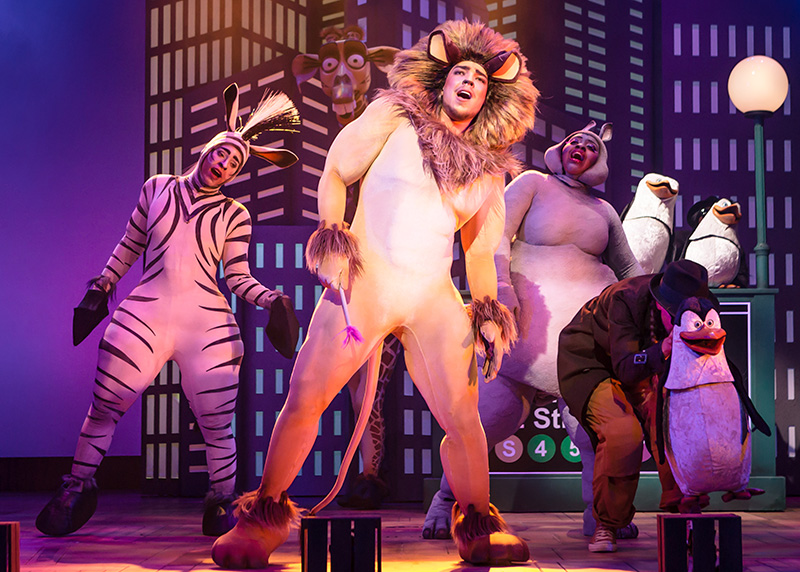 Despite an admirable supporting cast, this musical adaptation is more theme park than West End.

Anticipation in the audience is high as families pack into the Eden Court Empire theatre. Children waving coloured lights as they enjoy an outing with the family makes it almost feel like panto-season again with an inspirational overture, whizzing lights, and a big build up. On stage, a monkey appears to advise the audience to turn off their phones otherwise they will be pelted with poo, which is not quite what is expected. Unfortunately as the production begins and characters are gradually introduced, this atmosphere quickly evaporates.

The golden rule with successful musicals is ‘the book, the book, the book’. Regrettably, Madagascar The Musical does not have a good one. Despite numerous changes in scenery and a hard-working cast, the story lacks cohesion or any memorable songs. After a turgid first half, the introduction of King Julien (admirably played by Darren John walking on his knees) brings a semblance of humour to the show. Every fan of the film recalls and loves the rendition of Reel 2 Real‘s “I Like to Move it” and at last the audience are engaged. This is the only highlight of the show.

While the puppetry and supporting cast work incredibly hard – catching the voices of each penguin perfectly, for one – the same cannot be said of the main cast, partially as a result of the costuming. It is difficult to believe in a lion and a hippo dressed in white costumes already showing signs of wear to begin with, but Matt Terry as Alex, Antoine Murray-Straughan as Marty, and Timmika Ramsay as Gloria additionally have their movement hampered by the costumes. Only Jamie Lee Morgan creates a believable character through his puppetry and physical style as Melman.

Casting an X Factor winner as the main protagonist is a tricky decision in any production, and while Terry possesses credible vocal ability, the lack of stage training and charisma is evident. Although other cast members, namely Ramsay and Murray-Straughan have their moments, the dialogue and jokes are often lost in the speed of delivery. Similarly, despite the professional choreography and staging there is a lack of energy or commitment from the cast.

There are some positives to be found however. The scenery and lighting are all of a high standard and, as previously noted, the ensemble of Shane McDaid, Matthew Pennington, Laura Johnson, Jessica Niles and Victoria Boden successfully achieve the seemingly impossible task of voicing and animating Skipper, Maurice, Kowalski, Private, Mort, Rico, and many more.

With its 25-minute interval, Madagascar The Musical feels like a half-baked theme park entertainment show which has been turned into an overpriced, main stage musical. As a lover of the original film, it is depressingly disappointing.