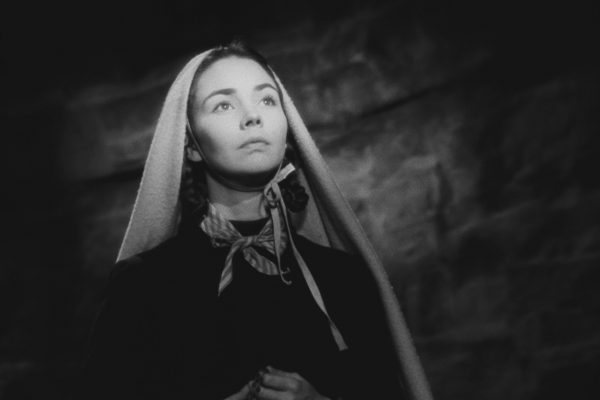 The Song of Bernadette

Crack open the choccy Easter eggs (better still, the Ferrero Rocher which were inspired by the grotto at Lourdes). It’s the life of St Bernadette.

We are in a small town on the border of France and Spain in the mid-19th century and Bernadette (Jennifer Jones) and her family live in dire poverty. When the simple and sickly Bernadette is down by the river collecting firewood with her sister she sees a vision in a cave. It’s a glow-in-the-dark Linda Darnell – oh no, it’s the Virgin Mary.

Jennifer Jones was famously the find of movie mogul David O Selznick. He was determined to marry her and make her into a star. This was her debut. She has a beautiful face and is certainly a suitable case for canonisation on those grounds alone.

This overlong film is ploddingly directed and the special effects thuddingly literal. When Bernie sees Our Lady she’s just like a statuette seen in any church. As melodrama, every cliché is laid on with a trowel. Not much real acting as required from Jones, she just needs to kneel and stare with her great pellucid eyes.

It’s the reactions of others to Bernadette’s claims of divine sightings – notably those of the local chief nun (the glorious Gladys Cooper) and the fathers of the town – that make the film more interesting. As the men (including Lee J Cobb and Vincent Price) dither heavenly choruses sing.

Bernadette’s “heathen gymnastics” threaten the extension of the railway to town. Questions are asked as to whether she is an imbecile, a swindler or just a religious fanatic. Even when she discovers a healing spring the authorities scheme and plot to destroy her. The grotto is boarded up and only when Emperor Louis Napoleon intervenes are its miraculous properties recognised.

Despite these criticisms, the film stands up rather well considering it is 75 years old and the status of the Catholic Church and attitudes to disabled people have changed beyond recognition.