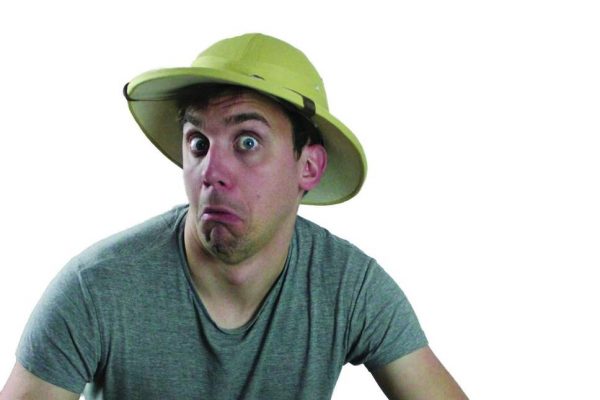 Mat Ewins
What Sorry? My Mistake! The Doors Are Not Open; The Show Has Been Cancelled. Do Not Have Your Tickets Ready!

Ewins returns to the Fringe with another hour of inspired nonsense

Mat Ewins returns to Fringe with a hotly anticipated show after scoring an Edinburgh Comedy Award nomination last year. Not that you would think that from Ewins’s self-deprecating jokes and comic complaints about his career at the start. Chief amongst them is his lack of acting opportunities. This is something he finds particularly ridiculous given the roles that are given to footballers. He demonstrates this by showing a real footballer movie cameo before amusingly playing a clip of Cristiano Ronaldo’s “role” in Schindler’s List.

Those familiar with Ewins’s work will know he does multimedia shows with high-concepts and its no different this year. After deciding he will never be an actor or produce a normal hour of stand-up he has decided to tick something more realistic off his bucket list. Namely starting a newspaper on Mars. This is where the majority of the show takes place; on Mars in the year 2068. The audience are introduced to this concept a with series of very silly videos demonstrating what the future will look like.  After which he enlists the audience to be the journalists in his new newspaper venture.

Even although his technology malfunctions a couple of times most of the audience interaction stuff works beautifully. Whether it is a rigged version of Wii Golf, a Job interview simulator video or an audience-read play from the future, they mostly provide hilarious results. Not everything works though, as the majority of the audience seem baffled by an extended riff he goes on about fucking your clone. That said there is something amusing about watching him double down on the bit because of this.  Also while there is plenty of laughter in the room you suspect this was not the most enthusiastic audience Ewins has had in his run thus far.

Maybe because of this the energy does somewhat drop towards the end. Particularly during his, you presume deliberately, awkward attempt at normal stand-up. This, however, does not unduly detract from a show packed with invention, silliness, jokey references, sight gags and call-backs galore. Ewins ends on a high with one last great call-back and very funny end title sequence.