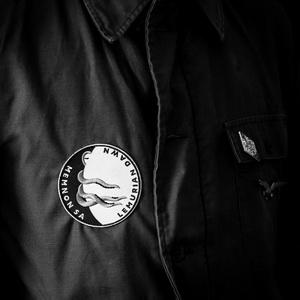 Doom project goes back to the future via pulpy sci-fi and primordial drum circles.

Lemuria, a long-discredited ‘lost continent’ once thought to have spanned the Indian and Pacific Oceans, lives on in popular culture’s imagination as a symbol of existential fear; of Earth’s unknowably distant past, and its equally opaque future. Misha Hering – AKA Memnon Sa – is by no means the first musician charmed by ancient worlds hypothesised in esoteric texts by fringe intellectuals (countless black metal groups have whole backcatologues dedicated to just that). Yet his second LP Lemurian Dawn indulges cosmic horror not by drawing us into the void, but by looking to its expression in paranoid post-war British television and existential science fiction cinema.

“Does this sound primal and sinister?”, Hering asked himself during his composition process. One of the most impressive aspects of the album – and arguably its near-literal beating heart – is its heavily pulsing percussion, striking like bone to rock (primal? Check), as coldly anachronistic synthesizers hover above, like UFOs blankly observing humans going about their Neolithic business (sinister? Check). The indistinct vocal mumbling of Celestial Ark is straight from the depths of Sunn O)))’s Agartha, and Daughter of the Cosmos riffs hard on the same eerie vibes as David Bowie’s Warszawa. Album closer Ahura Mazdra trails away into resigned ascendance, as snares and cymbals rise into the ether in a way that echoes the finale of Godspeed You! Black Emperor’s Lift Yr Skinny Fists Like Antennas To Heaven. It conjures a spellbinding and ambiguous image, either of alien abduction or rapturous final judgement.

Where 2014’s Citadel failed to free itself from Mogwai’s inadvertent spell over post-rock, Lemurian Dawn feels like the first Memnon Sa album to successfully synthesise influences into a fascinating whole. But for all its power, it works with a 70s sci-fi palette just enough to feel kitschy, like Eduard Artemyev’s meditative score to Stalker crossed with the grey provincialism of Children of the Stones. Who knew that a gloomy past-future could be this much fun?