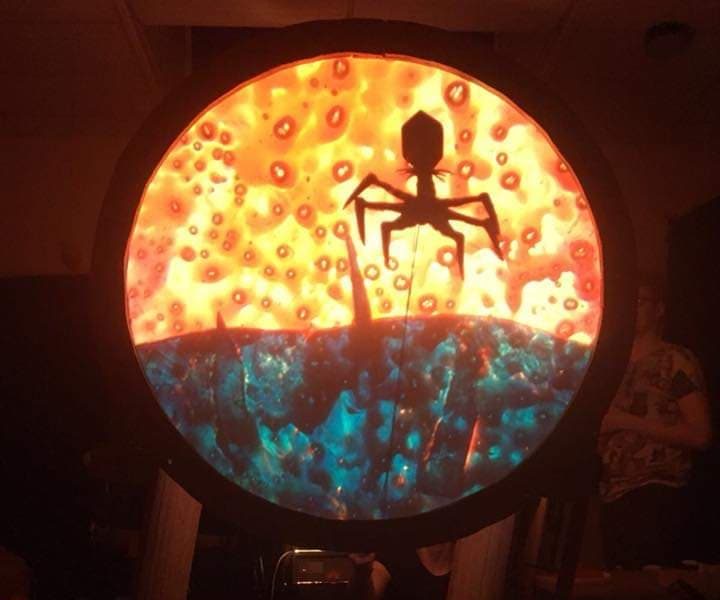 A delightful and informative journey into a microscopic world

Microbes are all around us, and Microbodyssey gives you the chance to meet them up close! With puppets, songs and audience participation this show is accessible and entertaining but still pleasingly scientifically accurate.

Being careful to keep arms and legs inside the vehicle, the audience is shrunk down to journey into the microscopic world of bacteria, viruses, phages and even tardigrades. With our guide Charles the scientist and with the help of Brenda, a giant body, whose stomach is the screen for the shadow puppetry, the unseen world is brought to life.

The show strikes an excellent balance, there is audience participation, shadow puppets, and 3D puppets that make their way through the audience, songs as well as music and talking. Although several times the shadow puppets were out of focus, they were cleverly done especially the phage inserting its DNA into the bacterium. The pace and combination of different techniques keeps the audience engaged throughout and works exceptionally well with the target age group as does the performer’s infectious enthusiasm that doesn’t falter in the face of a rather small audience.

There is a definite educational side to the show, but it never feels heavy handed, the correct terms are used for the microbes while the language used to describe what happens is highly age appropriate. Important messages about antibiotics are well illustrated with the help of the audience and some wriggly, ‘good’ bacteria and the best way to combat viruses has a delightful hand washing song (with actions). One aspect that could definitely be improved was a sense of the scale between the different organisms, it was not necessarily clear that while small, tardigrades are rather larger than say, bacteria.

There is no need to be into science or a child to enjoy this show, with infectious enthusiasm and gentle humour it is really for everyone. Crammed into the hour is laughter, music and wonder and the time simply flies.