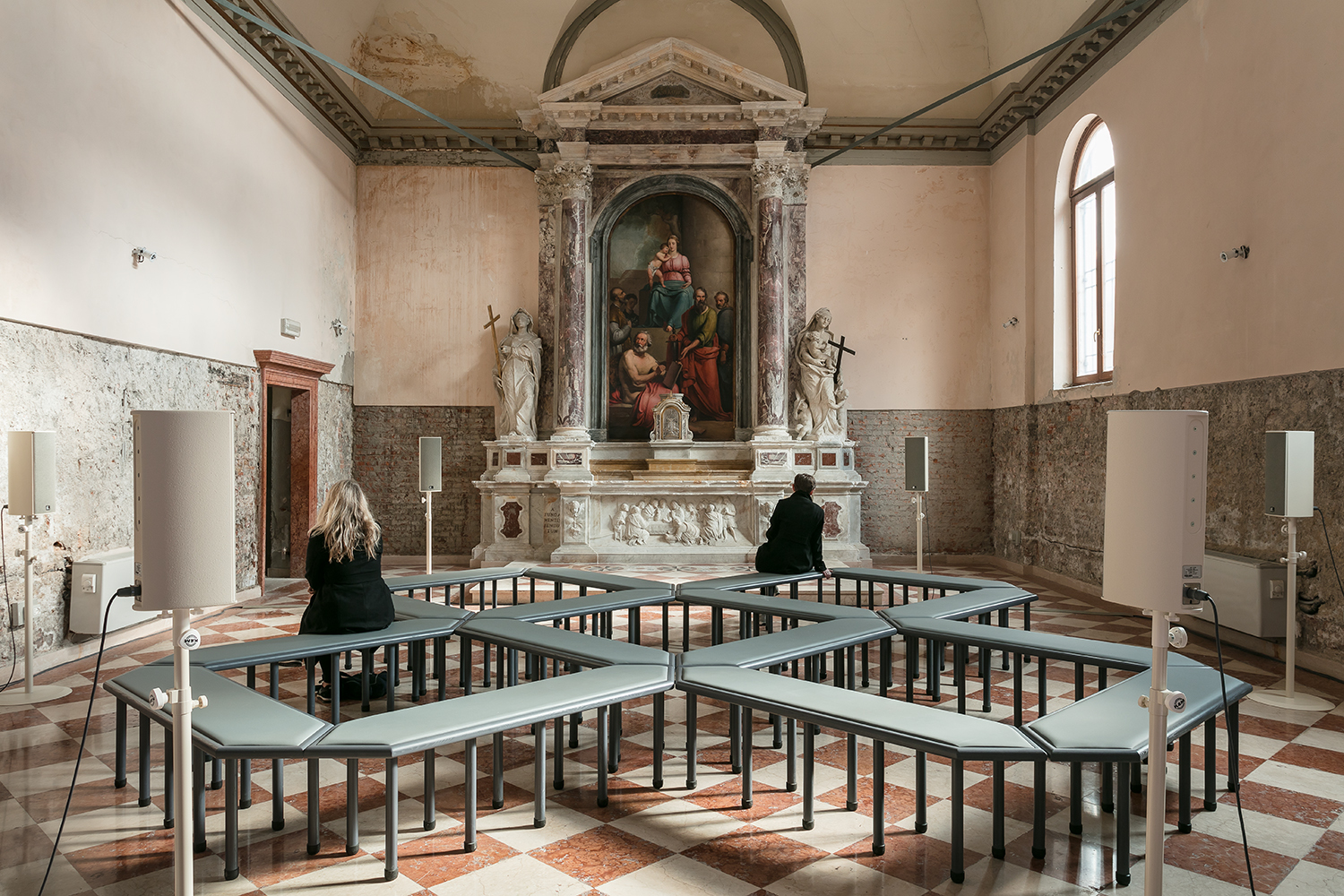 Currently on display at Collective Gallery’s City Dome is Migratory Motor Complex (2017), a sonic work by Turner Prize nominee and Berlin-based artist James Richards. Richards was nominated for the Turner Prize in 2014 and his artworks often draw on easily accessible images found across various online and archival sources. Working across film, installation and sound, his projects often involve collaboration with various artists and art forms.

Prior to entering the exhibition space, Richards’ six-channel audio installation can be heard projecting not only within the exhibition space but out across the grounds of Collective Gallery on Calton Hill. Reaching the viewer’s ears prior to any visual association, the artwork is instantly intriguing.

Upon entering the space, the viewer is greeted by a carefully constructed formation of grey benches which invitingly encourage the act of sitting down. The benches are arranged in a geometric-like pattern, reminiscent of a beehive. The gaps between each seat create a noticeable pocket of absence, heightening the presence and awareness of sound within the room. The walls of the City Dome have been stripped fully back to their bare brick, creating an intimate space through which various sounds unfurl. The recorded sounds vary greatly, taking the viewer on an audio journey – from haunting songs which ring out and across the brick of the building, to field recordings and obscure electronic audio which bring to mind alternative locations.

Natural elements feature against more glitch-like noise, throwing the viewer across time and space as each sound brings to mind associations of the world beyond the confines of the gallery space. The sonic work is projected loudly through its six channels, immersing the viewer in its audio world and allowing the individual to form their own visual narrative in accompaniment of the tracks.

Most renowned for his video work, recently James Richards has been experimenting with various forms of audio-based artworks. Migratory Motor Complex is the third iteration of the work, which Richards continues to layer and build upon. Curious as to how sonic and musical forms situate themselves within visual arts contexts, Richards has been in collaboration and studio improvisation with vocalist Kirsten Evans and film composer Samuel Williams. Through a gathering of their responses to his improvised prompts, Richards has collated the vocal responses, manipulating them to construct the final audio artwork. In a sense the work is both a digital and audio collage, which sees sounds such as the fall of breath blending steadily with more electronic elements. It is a work with no beginning and no ending. Instead, it manifests most strongly as a presence experiential for the viewer.

The work strongly reflects the technological, with digital glitching and microphones being audible. The sound is also accompanied by a commissioned text written by Chris McCormack, exploring vocal pressures such as the deepening of the male voice during puberty. Sitting both separately and simultaneously alongside the sonic work, the text lends a poetic interpretation and observation strand to the work. Overall, Migratory Motor Complex is a surprising and compelling work which transports the viewer within themselves.