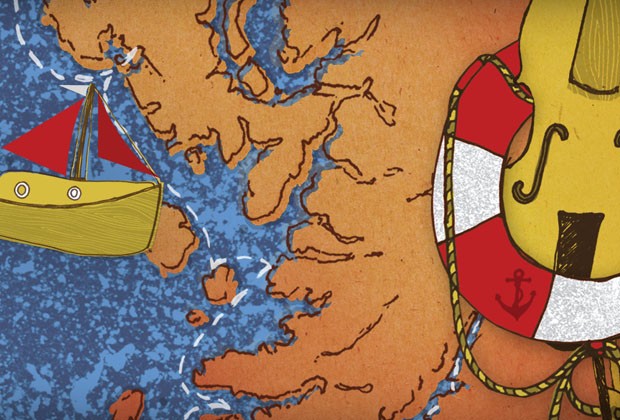 Mike Vass: In the Wake of Neil Gunn

[rating: 5/5] A beautifully crafted cinematic concert that recreates a maritime journey inspired by Gunn‘s book Off In a Boat

Acclaimed Scottish composer and fiddler Mike Vass performs his brilliant 2014 instrumental album In the Wake of Neil Gunn. Nominated for the Scottish Album of the Year award, it takes you on a unique maritime journey, inspired by Scottish writer Neil Gunn‘s book Off In a Boat.

While seriously ill and in hospital, Vass was given the literary work, describing a three month long voyage in 1937 around the spectacular Inner Hebrides. The story impressed him so much that, in effect, he set off on his own version of the trip, joined by a small crew which recorded the adventure. The album’s ten compositions, which hop across folk, classical and electronic styles, feature samples of “found sound“, recorded on the trip, and live instruments captured later in the studio.

The concert itself stuns from the very first composition with the quality of its cinematic sound. On stage, Vass is joined by eight of Scotland‘s finest traditional musicians who effortlessly switch between different instruments (The Cairn String Quartet, plus piano, flute, guitar, oboe, double bass, percussions, sampling). Supplemented by film excerpts and photographs from the journey, alongside spoken extracts from Gunn‘s work, the performance devises a captivating picture that astounds with its integrity and vividness. Variously subtle and symphonic, its beautiful tunes evoke the constantly changing moods of the sea, landscape and weather, in a perfectly crafted artwork that stays with you for long after the end of the last composition.