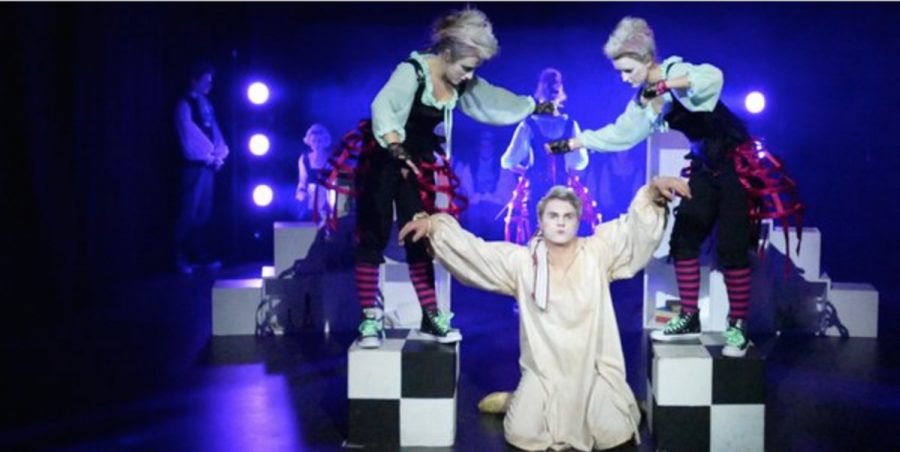 A fun and very physical adaptation from the renowned French writer.

One of the cruellest anecdotes surrounding The Hypochondriac, Molière‘s last play, is that the worries of Argan, the titular character, came true for the author. Molière was acting the part before the French royal court when, during the last act, he suffered a haemorrhage brought on by a fit of TB-induced coughing. The performance managed to continue, only for Molière to return home, suffer a second attack and die a few hours later. The irony is either delicious or tragic, depending on how de-sensitised you are.

Happily, no such real-life tragedy occurs here. Instead, Greene Shoots Theatre present a fun, highly energetic and exquisitely dressed hour. The set is relatively bare – a stack of chequered boxes and a chair – but the costumes make up for it. Powdered and pomaded hair, with added glitter, compliments corsets, foppish coats, stripy socks and exposed panniers. Stark colour contrasts allow for easily identifiable characters, and prove striking in their simplicity.

The adaptation sticks very closely to the original plot – a few characters have been trimmed, but this only makes for a leaner performance, strong on comic timing. The company all acquit themselves well, especially given their extreme youth, though a few characters stand out – George Lewarne as the bullying neurotic Argan, Chloe Champken as his put-upon daughter Angelique and Harriet Fisk as the world weary maid Toinette, clearly the smartest character in the room.

In addition to the main characters, the production makes use of a sort-of Greek chorus, who assist with explaining the character’s motivations, offer them inspiration and, occasionally, hilariously harass them. The idea takes a few moments to bed in – initially feeling a little self conscious – but once it settles, the majority of what they do works. Particular highlights include a beautifully choreographed dance scene, brilliantly played for comic effect, and a shifting human wall/maze in a farcical chase scene. In short, and in contrast to the pain of Molière’s last performance, this is a delightfully light and silly way to start your day.