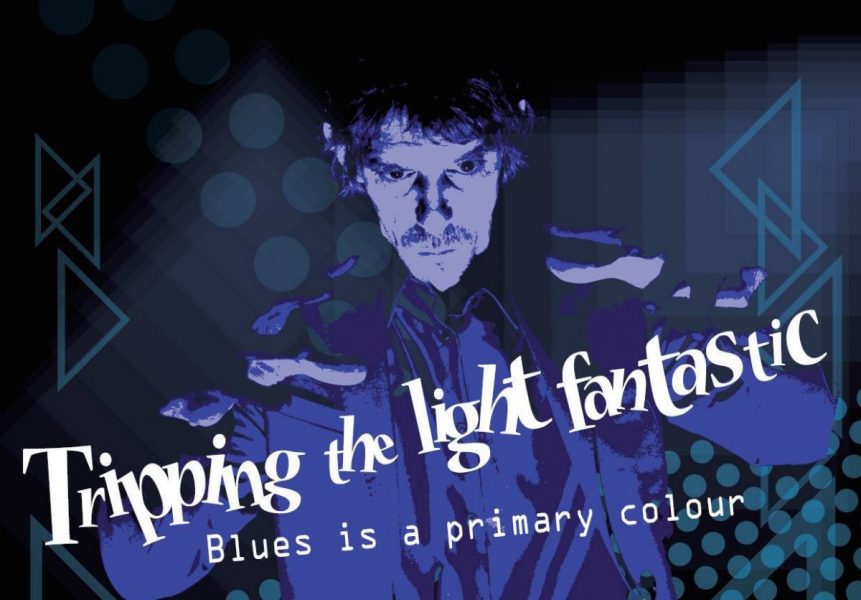 Blues is a Primary Colour

Animated and experimental, Tripping the Light Fantastic brings blues up to date

Tripping the light fantastic is a project born under the collaboration of Justin Lavash, a British guitarist, singer and songwriter, and Darrel Jónsson, an american film maker and video artist. They are both based in Prague, where the idea was developed. They present the show Blues is a primary colour at the Fringe, joined by Frazer Watson playing drums.

The show consists of Lavash performing a series of his compositions on acoustic guitar, skilfully helped by a set of various guitar effect pedals. Behind him, Jónsson’s original projections create a scenery that echoes 20th century experimental cinema and, in some parts, it is reminiscent of a 60s interactive psychedelic live show.

Lavash’s acoustic guitar produces a round and complete sound, with the use of bottleneck and different left and right hand techniques, that returns to the old bluesmen’s concept of making the sound of an entire orchestra with guitar and voice on their own. The powerful bass lines in fingerpicking style, that accompany blues melodies, and the guitar phrasing create a dynamic that starts from a whisper and then grows in a crescendo of hammering intensity.

Lavash’s style is truly original. During recent years he has been on solo tours across the Czech Republic, France, Germany and Britain. In his compositions there are influences of folk and jazz, while blues is what we hear the most. He has been playing professionally for the last 20 years, starting in the 90s London jazz scene. Jónsson conducts experimental media workshops at Prague’s Meet Factory and works with live video, photography and film in his project Urban Space Epics.

The performance brings together the acoustic guitar and the resonant voice of Lavash with the landscape created by Jónsson’s video projections and the particular use of lights, and the support of Watson’s drumming. This results in a 60-minute colourful experience where psychedelic atmospheres and blues typical icons, like the train of the last song, give life to an evocative and original animated picture and sound journey.