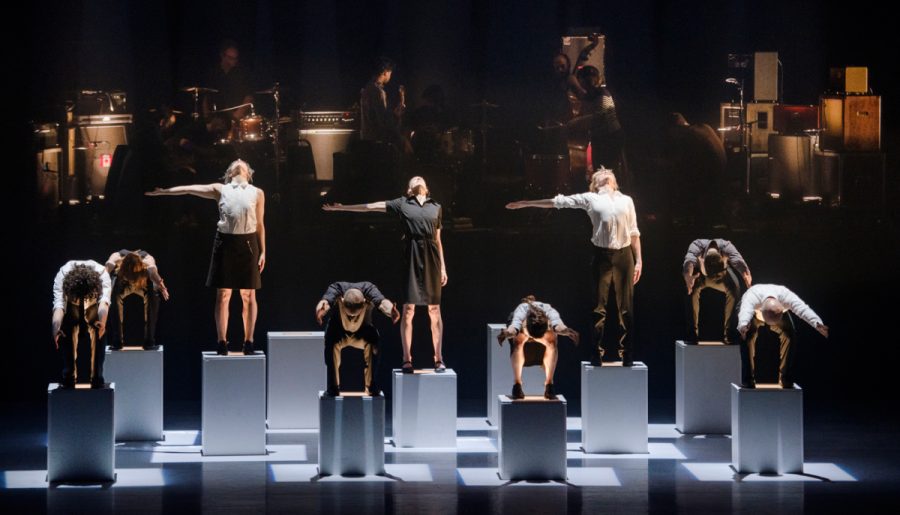 A fearless, earth-pounding roar of defiance.

A towering example of the power of performance

First staged in 2005, Monumental is uncompromising in its righteous, pin-eyed fury. This is not Swan Lake, ballet fans; nor is it the fluid grace of more mainstream contemporary dance– as the steady stream of baffled walkouts throughout The Holy Body Tattoo’s hour and a half long performance testified to. What it is, is something far more ambitious: dance as exorcism.

Reflecting its title, the majority of Monumental has Holy Body’s nine inexhaustible dancers perform atop short, metre-square pedestals. Robotic, tic-like rhythms, itches, kicks and spasms characterise much of Naom Gagnon’s and Dana Gingras’ choreography. Clad in black and white work-wear—shirts, ties and pencil skirts from Marliène Bastien—this is a merciless dissection of modern living and especially corporate anonymity, the private hells that exist behind blank commuter faces; the dichotomy of being at once part of a whole and feeling utterly alone. Fleeting moments of choreographic synchronicity suggest something of the power of the community over the individual. But, more often, Monumental emphasises the flip-side: that tribal need to belong that results in safety for some but also inevitably, ostracism of others.

Elevated above the dancers’ frenetic movement and shrouded in darkness, Godspeed You! Black Emperor play Monumental’s thunderous score live and ferociously, deserving far better acoustics than the Edinburgh Playhouse can give them. Nevertheless, their music propels the drama onstage through haunting moments of solitude to apocalyptic acts of violence— the ominous voice-over from 1996’s Dead Flag Blues has never seemed more fitting than as a backdrop to Holy Body’s frenzied soloists. Marc Parent’s lighting floods the otherwise stark stage like adrenaline into terrified veins, while William Morrison’s film projections are used satisfyingly sparingly until their breathless visual crescendo in the performance’s cacophonous final section.

It isn’t perfect. As a performance that relies so much on individual dancers, the audience members beyond the first few rows are at a distinct disadvantage; the inability to see the dancer’s exhaustion stunts the audience’s engagement with the themes of social collapse and individual desolation. There are many long pauses in the action, that lead to impromptu applause and chunks of the audience halfway out of the auditorium before they realise there’s still twenty minutes to go. However, in its best moments, Monumental is transcendent: a towering example of the power of performance to both illuminate and damn.