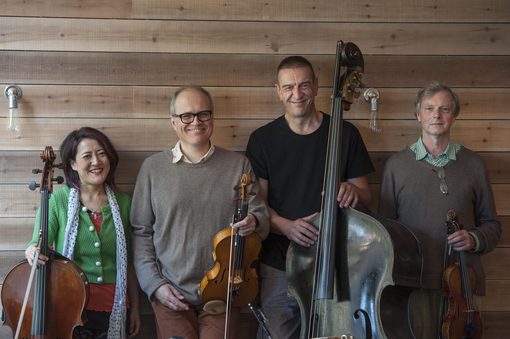 Music from Mexico: Latin or crossover?

Mr McFall’s Chamber regularly assembles some very talented musicians and explores often unusual aspects of classical music as well as crossover to different musical genres such as folk, tango and jazz. In the recent past, they have focussed on music from Latin America, particularly the compositions of Piazzolla whose opera María de Buenos Aires they recorded recently. So it is a short step to exploring music from Mexico, as they are doing tonight. In this venture, they are assisted by well known Scottish tenor Jamie MacDougall, who has a keen interest in Mexican music.

The first half of the concert seems rather flat, as it consists of four short works using piano and just one other instrument. The compositions are typically by Mexican composers who had often spent time abroad in the US or Latin America, often for political reasons. Outstanding among the performers are cellist Su-a Lee and pianist Claudio Constantini performing a work by Heras, which displays Lee’s great flair with the cello and her pleasure in making music. Other works in the first half are by Manuel Ponce, Pablo Moncayo and Silvestre Revueltas, but done with one or two instruments, none of them really took off or displayed “duende”: the spirit and passion of Latin music.

The second half of the concert features the full group, with Cyril Garac and Robert McFall on violins; Brian Schiele, viola; Lee on cello; Rick Standley, double bass; and Stuart Semple, percussion. They are accompanied by Constantini on piano, and with songs by MacDougall, it makes for a much livelier second half. Yet there is a lingering question: is this really Mexican music, or classical musicians playing Mexican music? This question is posed most sharply during MacDougall’s songs. Now, MacDougall is a very fine tenor, but he is a classically trained opera singer and his Mexican songs, although well sung, don’t convey the spirit of Mexico.

Perhaps his most successful song is the most famous of all songs, Granada, written by Agustín Lara before he had even seen the city of Granada! MacDougall treats Granada as a fun piece, prolonging his notes and engaging in vocal flourishes, and he does get a good response from the rather thin Queen’s Hall audience—but it isn’t quite authentic. Other works in the second half were by Álvarez, Márquez, Grever, Ortiz and Pérez.

It’s a good concert but not a great concert. However, Mr McFall’s Chamber are nothing if not deterred: their next concert is of Polish music!