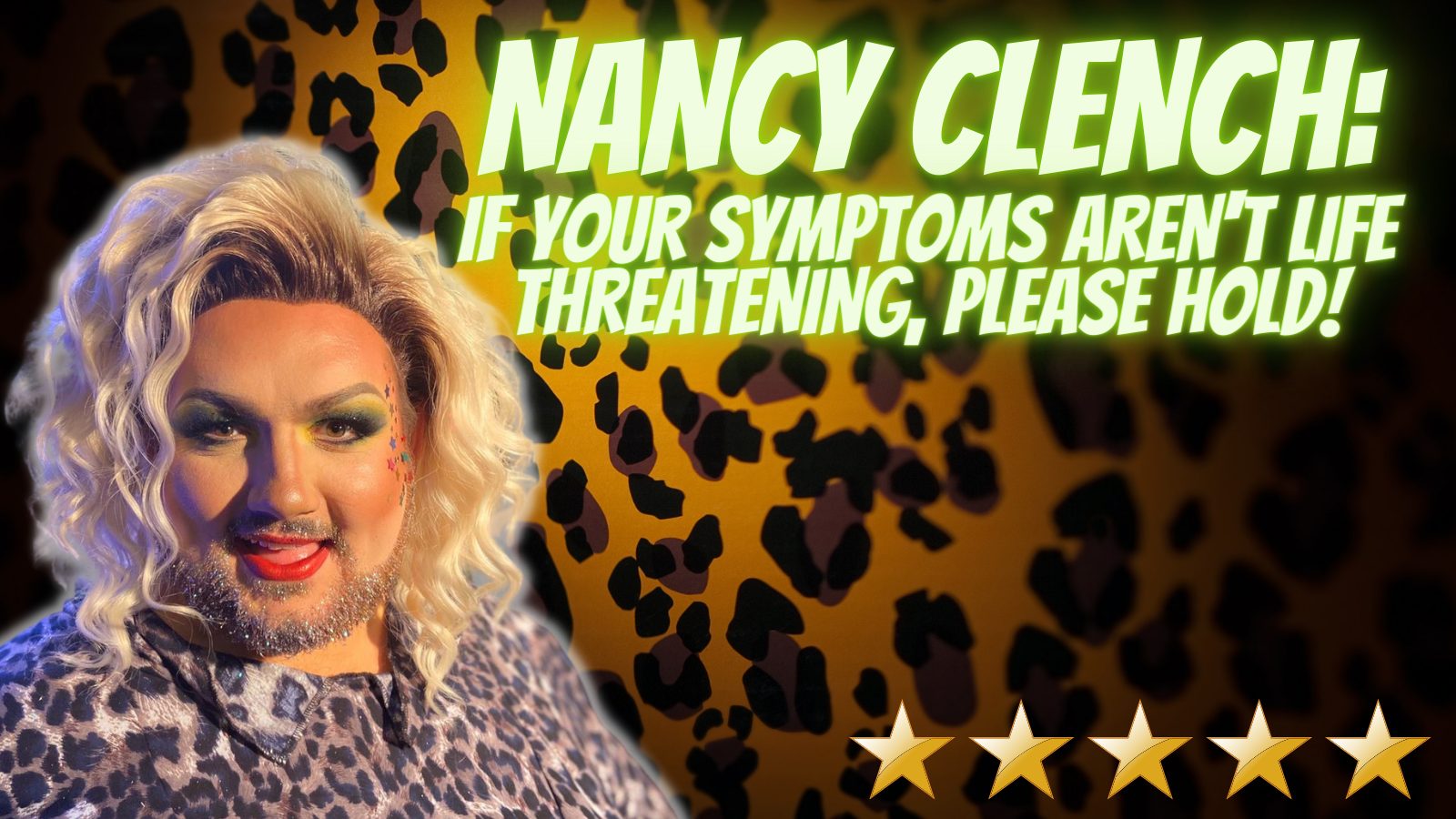 Given the right circumstances, Nancy Clench is clearly a garrulous raconteur, but unfortunately nothing slots into place this evening

Poor Nancy Clench is on a hiding to nothing on a Sunday evening in the Charteris Centre, fulfilling Just the Tonic duties as the Nucleus this year. Not only does the ‘Sub-Atomic’ Room’ suggest ‘speeding awareness course’ a lot more loudly than it screams cabaret, but Clench’s show, heavily predicated on audience participation is somewhat sparsely attended. That said, it does provide a perfect moment that could only happen at the Fringe.

Clench (the alter-ego of Nathan Sparling) is a bigger-than-life presence. 6’5″, and with a brashness to match, she’s full of tales about her stint as a doctors’ receptionist during the Pandemic and her own medical woes. Most of these stories seem to involve a heroic/suicidal intake of alcohol, which leads to the comedy gods stepping in.

In the most incongruous case of audience and performer one could hope to see at the Fringe, the front row is made up of four Muslim women. Not for one second would one claim that this should be any barrier to enjoying a drag show, yet the sight of Clench’s tales of inebriated debauchery meeting polite bemusement is compelling in itself. To her immense credit, Clench is undeterred and does everything she can to get the women involved, probably due to a lack of other options. Yet the culture clash is too great; the effect like trying to breach a fortress with a custard pie trebuchet. Eventually the situation powers all the way through funny, and ends up in the realms of the painful.

Clench’s tales of her misadventures become a little wince-inducing too. Lamenting she can no longer wear heels due that most Dionysian of ailments, gout, she’s off on yet another story of another bender; making a valiant effort to drink a package holiday dry, or downing eighteen shots in 30 seconds during a show. You begin to worry for her well-being. Again, this material may play well with a busy, rambunctious audience on a Friday or a Saturday but to a spartan – and clearly sober – audience it comes across as much darker and confessional, and more than a little uncomfortable.

Given the right circumstances, Nancy Clench is clearly a garrulous raconteur, but unfortunately nothing slots into place this evening. The venue feels wrong, the audience is too sparse – and too teetotal – for the hedonistic material to land, and the stories themselves begin to feel bleakly cyclical. All credit to Clench for refusing to be anything other than all guns blazing in adverse conditions, but this is just one of those nights.