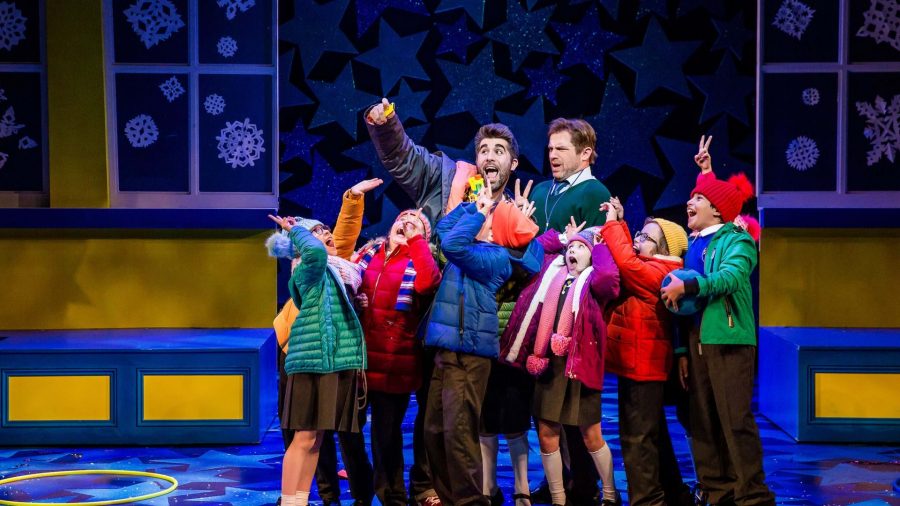 Exuberant, infectious festive fun has arrived at the Festival Theatre.

St Bernadette’s Catholic Primary is a down-on-its-luck school, filled with big hearted kids who are low on ambition. A stark contrast to Oakmoor, the poshest school in Coventry, whose kids have pristine uniforms and everything to prove. When Oakmoor’s Christmas Nativity show is lauded and St Bernadette’s is panned, it becomes a symbol of the gulf in aspiration and achievement between the two schools. But the arrival of the apparently hapless Mr Poppy triggers a chain of events that result in… well, if you haven’t seen the films, you can probably guess. Suffice to say that the return match sees St Bernadette’s rocking the room.

Maddy (13) was a devotee of the Nativity films before she became teenage and cool. I (older) haven’t had the pleasure. But whether you’re a newbie to the Nativity franchise or a loyalist who shot to the cinema for the opening night of Nativity Rocks, you’ll be more than content with the stage show.

The most incredible thing about Nativity! The Musical is the quantity of people on stage. I counted 26 kids and more than a dozen adults. Even if the set hadn’t exuberantly filled the stage, the colour and energy conjured up by this cast was a delight.

What is more, they are pitch perfect. Scott Garnham is an endearing Mr Maddens, sitting disconsolate at home wishing his long lost love, Jennifer, would call. Ashleigh Gray as Jennifer is nicely convincing as the woman who followed her dreams, even if it took her a while to work out where they were leading. Jemma Churchill is stoic and fierce as the headteacher who’d lost sight of the pupils she was fighting for. Mr Poppy (Simon Lipkin), meanwhile, is the most infuriatingly charismatic leader of a (Nativity) revolution there ever was. Jo Brand as the ascerbic critic was exactly as ascerbic as you’d expect. And the kids are spectacular.

It’s a total treat to have a live band in a touring show, as well as have the technical wizardry on show in this inventive set. Andrew Wright has done a brilliant job with the choreography, as has Rebecca Louis who must have rehearsed the local cast  in each location. The St Bernadette’s kids are just ramshackle enough in their dance numbers to clearly be entirely in control, while at the same time being entirely convincing as the giving-it-their-all performers, bursting to shine.

Debbie Isett’s script bounces along, full of fun, topical references and the sort of split level jokes that appeal to all ages in the audience. A couple of vaguely homophobic quips were the only thing that jarred in a story that otherwise joyously celebrates human diversity.

Ultimately, this is a show about having hope, even when the odds are stacked against you. It’s funny, touching and infectiously festive. Bursting at the seams with all the things you’re never meant to work with in theatre (yes, they have a live dog), it’s a party popper of a show that coaxed most of this audience into a standing ovation.