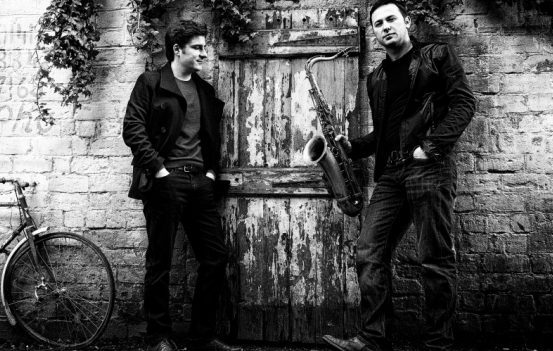 The New Focus Quartet, performing tonight at the Tolbooth, is a great example of what Scottish jazz has to offer.

Konrad Wiszniewski (who plays for the Scottish National Jazz Orchestra) and Euan Stevenson started the New Focus projects together, “when they were both single,” as they tell the audience. With their new CD, however, a new theme has emerged, a theme surrounding family. They have both married and had children since their first album, and a few of the songs they are performing this evening are dedicated to them.

The first set starts with an enchanting piano melody performed by Stevenson. It truly draws the audience in, setting the mood for the evening of music to come. The wild sound of Wiszniewski’s saxophones – he switches between tenor and soprano – takes over, relentless and ravishing. Looking at him play, the audience can tell how much he loves playing the saxophone and jazz music in general. His enthusiasm throughout the concert is palpable, even when he isn’t playing himself.

Their quartet is given depth with the sound of the double bass of Andrew Robb, a former Young Scottish Jazz Musician of the Year. The drums, played by Alyn Cosker (also a part of the Scottish National Jazz Orchestra), give another kind of energy, an essential beat to the songs the quartet is performing. The solo Cosker performs at the end of the concert is a highlight of the show. It is controlled and wild all at once, mixing jazz and rock sounds.

Their two sets are eclectic and engaging with a lot of ups and downs. The energy goes from maddening to nostalgic, from one song to the next, giving the sets a true sense of awe. The audience can never tell what will come next. Another highlight of the show is a brilliant cover of a Bill Withers song.

Jazz isn’t for everyone, of course. Its energetic, melodic and at times wild sounds really push the boundaries of formal music. The New Focus Quartet sounds are lush and the songs, while absolutely flawless, feel experimental, and that is the beauty of it. While their concert isn’t a visual experience of note, it is a visceral experience that the audience truly enjoys.