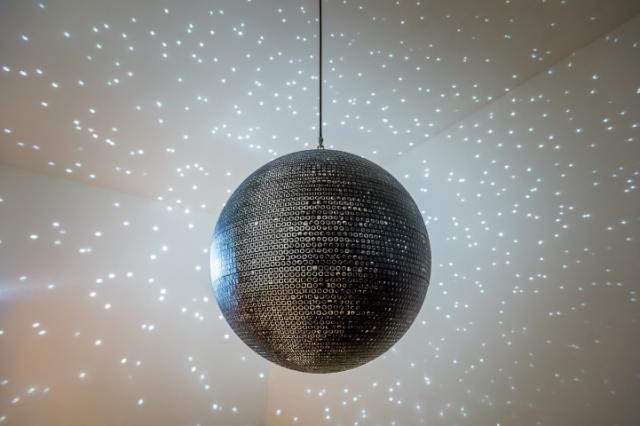 As the focal point of the Scottish National Gallery of Modern Art’s final exhibition in the NOW series, the work of Glasgow born artist Katie Paterson is an astonishing exploration of deep time and the cosmos. In a series of installations which seem to effortlessly combine the mundane and the celestial, Paterson presents a rare balance of intense academic rigour and almost magical poetry; resulting in a gallery experience which manages to be both intellectually edifying and aesthetically mesmerising.

Particular highlights include Totality, a mirror-ball made from over 10,000 historical images of solar eclipse, whose movement reflects the action of the moon obscuring the sun, and The Cosmic Spectrum, a colour wheel generated from scientific data, charting the average colours of the universe throughout each era of its existence. Similarly affecting is Earth-Moon-Earth, an automated piano, playing a version of Beethoven’s Moonlight Sonata, the score having been translated into Morse code, sent to the moon’s surface, and returned to earth in a slightly altered form.

A special mention must also be made for Paterson’s Future Library venture, the details of which are presented in a 26 minute long film. A new forest was planted in Norway in 2014, with a view to, in 100 years time, it supplying the physical materials for an exciting compilation of writing. Each year, one writer will submit a piece towards the anthology, which will be kept securely and not revealed until publication in 2114. Contributors thus far include such luminaries as Margaret Atwood, Elif Shafak and Han Kang. The idea of investing in the future in such manner, despite the century long time frame and amid ubiquitous dialogue about imminent climate disaster, elicits an inevitably complex, curious and intense emotional response.

There are another three artists in this exhibition – American artist Lucy Raven, photographer Darren Almond, and Glasgow-based performance artist Shona McNaughton. The fact that their works are somewhat eclipsed by Paterson’s here is not a reflection of their quality. Almond’s Fullmoon, a collection of long exposure photographs of a variety of different global landscapes lit solely by the light of the moon, possess a captivatingly ethereal beauty. McNaughton’s Progressive, a time-specific performance piece the artist delivered in Glasgow while 9 months pregnant, explores urban regeneration, identity and contemporary Scottish politics in a fresh and thought-provoking manner. Meanwhile, Lucy Raven’s moving image piece, Decca, explores picture construction throughout history. All of these works fit within the themes of NOW and contribute further depth and nuance to an exhibition that is deeply impressive in scope, ambition and execution.