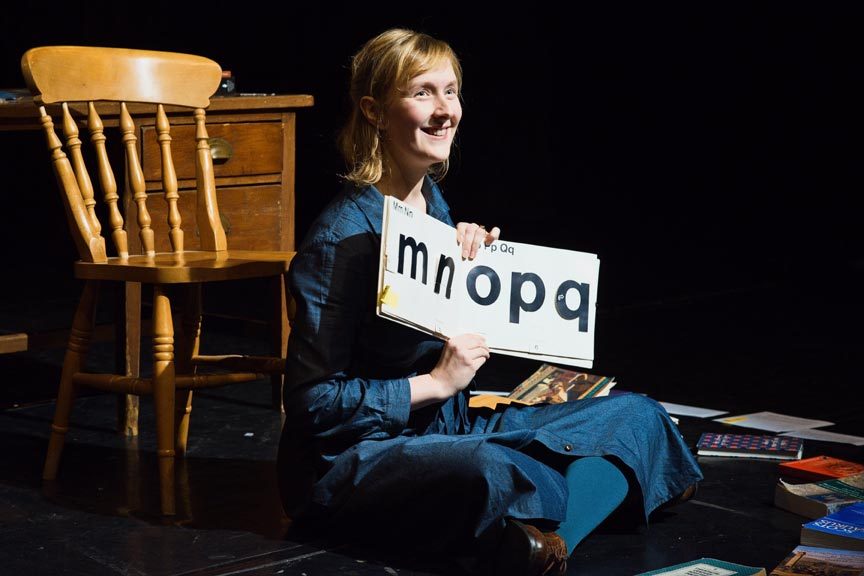 O is for Hoolet

[Rating:4/5] Is Ishbel McFarlane a wise hoolet? You decide.

Ishbel McFarlane writes, directs and performs in her one-woman show about the history, development and future of the Scots language. The show is partly auto-biographical and partly academic. There is a clear challenge for Scottish audience members to examine their own reactions to the language’s decline through the prism of Ishbel’s childhood and university influences.

Through vignettes from Ishbel’s own upbringing, where standard English dialect was the gold standard to aim for at school and at home, the topic is further developed by way of several different historical, political and academic figures, referring to their works, and all of whom proffer a theory as to why they believe we have got to our current state regarding our national voice.

This could become a little repetitive if it was presented character after character. However, the twist is in getting the audience to ask pre-written questions on cue. This results in adding a randomness of dialects, not necessarily Scottish, which complements another strand running through the play: that words can be said in many different ways and nobody can say, definitively, what the correct pronunciation is.

The subtext of the play is to question where the Scots language is going.  Because of the current strength of nationalist feeling in the country it was to Ishbel’s credit that the show doesn’t focus on this aspect and become a full-on Scotland the Brave rant. In fact, there is a clear call for Scots to look at how we have all been complicit in the dampening down of our linguistic heritage through either embarrassment or expediency. This is a point which is valid in many parts of the United Kingdom, not just Scotland.

The question and answer session shows how Ishbel’s research has given her extreme confidence in being able to field random questions with a disarming ease.

Going to theatre should primarily entertain. But if it can also educate and challenge the audience then you have a show that will be remembered far longer than a simple monologue. This production has accomplished this by making them question their own upbringing and preconceptions. It is also clear from audience reaction that others are recognizing many of the points also.

Ishbel admits that this work has been expanded significantly since 2014 but we can assume that it is a work in constant progress. So will there ever be a definitive version?

The show continues its tour throughout Scotland into June and it is well worth making an effort to see this informative and entertaining piece.

Read our interview with Ishbel from last year about this piece