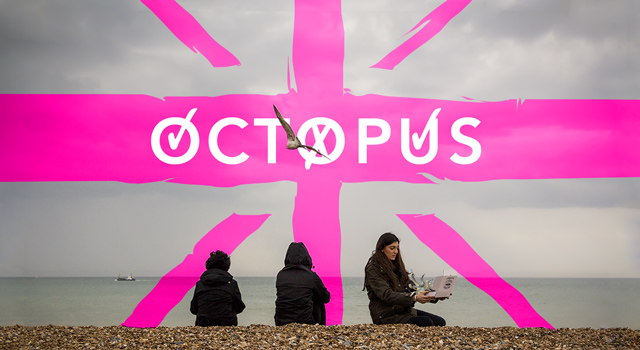 An anarchic and comic look at Britain's hybrid identity with a punk rock edge.

Octopus could not get much more topical in a post-Brexit Fringe festival. Set in the future where national identity is defined by the state, this new production from Fine Mess Theatre and Paper Tiger Productions tackles the thorny issues of Britishness and race.

Britain has decided to close its borders to undesirables in an effort to remove potential radicals. Scotland has voted “Yes” in a second indy-ref. Now three girls wait to find out if their family is considered “British” enough to avoid deportation. Writer Afsaneh Gray has created a world that is almost a little too close to the truth, and makes explicit what many of us are thinking about nationality: Britishness is being made synonymous with Englishness, and most of us cannot match up to the ideal.

The decision to look at British identity through the characters’ music preferences is a smart one, especially in the references to punk and post-punk music. Britain’s influential counterculture does not always get the attention it deserves in arguments about national identity, although it has formed a core part of the country’s cultural history. At a time when Britain tries to exert more control over its borders and the people living inside, Octopus reminds us that anarchy is central to our heritage.

Gray is clearly a gifted writer given the richness of her metaphors. The tangle of genomes in an octopus’s DNA for example makes a brilliant representation of Britain’s many hybrid identities. The imagery could perhaps have used a little more development, since the motif was first dropped into conversation at the play’s beginning and only explained properly towards the end. This is the case with much of the piece. Different ideas are often covered very quickly but then not returned to. At times Octopus felt like a patchwork of important issues that needed a little more interweaving to make it properly cohesive.

The play’s strength lies in its characterisation and how well the performers inhabit their roles. The well-meaning white person spouting tolerance whilst displaying underlying prejudices is comically on-point. Dilek Rose’s scatty character is completely endearing, perhaps because her role as a storyteller gives her lots of opportunity to describe her backstory. By the end of the play you come to truly care about all of the characters and their intricacies, which throws the real-life tragedies of immigration control into sharp relief.

All-in-all Octopus is a fun and heartwarming play that does well to highlight the myriad of hybrid identities inside Britain’s cultural make-up. Despite the script needing tightening in some ways, the play makes an affecting story about the plight of third-generation immigrants living in today’s Britain.