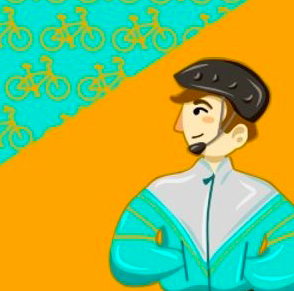 When a show advertises itself on the Edinburgh Fringe website as being, “From the award-winning company who brought you Six” (a musical which since its first run at the Fringe in 2017 has gone on to global success), it is either setting itself up for a great fall or it is going to be a rip-roaring success. Thankfully for On Your Bike, it is the latter.

The cast of four tell the story of Eatsaroo – a food delivery service whose riders are being taken advantage of – and a local chicken shop who are unlikely to survive the introduction to the town of a multi-million pound franchise, KFK. Alongside their fast food woes are relationship issues, money worries and moral dilemmas. Not necessarily the typical fare for a good-time musical but with an array of wickedly clever songs (composed by Ben James) and impressively polished performances it is no real surprise that the show has already got a full house.

Too many shows try too hard. They try to pack-in increasingly complex choreography which not everyone is capable of, or they play around with far too much scenery and way too many props in a bid to stand-out. On Your Bike keeps it simple and because it does it is a huge success. Every note is hit, every step perfected and the four performers deserve equal praise for their performances: Ella Nevill as Gemma, Emilia Grace as Daisy, Claire Lee Shenfield as Felicity (who it should be noted adds much of the comic value to the production) and Dominic Carrington as Aidan.

Given that this is an am-dram production or, as the Cambridge University Musical Theatre Society call themselves, a “Cam-dram” production it is very impressive and mention must be made of the writer, Joe Venable, for taking such a current and newsworthy issue and turning it into such an entertaining show. On Your Bike deserves to sell-out its run.